MOVIE WEEKEND: THE QUEEN OF VERSAILLES

Today I present for your consideration yet another film that allows us to peer into the lives of strange and fascinating people. This documentary is called The Queen of Versailles (2012, Rated PG, Available On DVD and Netflix Screaming). 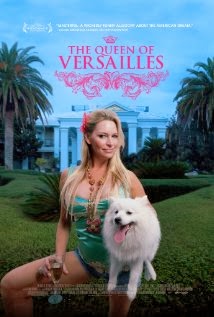 David Siegel made a boatload of money selling time shares. Along the way he shed a wife–or maybe two, I can't remember–and some kids. Then he married his trophy wife, Jackie, and they had a boatload of kids together. They decided to build the largest private residence in the United States–not too terribly far from where I live in Florida, yet light years away. This home would be based on Versailles. But then the economy tanked and David's business went down the toilet, and there they were, stuck living in the regular old mansion that wasn't big enough for all of them. Construction on the new home ended.

The Queen of Versailles ranks right up there with the strangest and most interesting documentaries I've seen. Jackie is particularly hilarious when she tries to save money. She sends a limo to McDonald's to get food. She visits a friend and rents a car, I think at Hertz, and asks what the name of the driver is. The guy behind the counter has to explain to her that cars at Hertz don't come with drivers. The Siegels have a bunch of dogs that poop all over the place. They are rich slobs.

We also see the new home that's in the midst of construction, and Jackie shows off the staircase she's going to use to "visit" the children. She buys cartloads of Christmas presents for the kids, who open their gifts, unimpressed, saying things like "I got this last year."

I'm torn between thinking these people are a riot or absolutely pathetic. I certainly feel sorry for the children. Jackie appears to be a blank-eyed drone with outrageously over sized boobs created by plastic surgery, yet at times she's a well meaning and kind blank-eyed drone with outrageously over sized boobs. Whether you think the Siegels are interesting or pitiful, this documentary certainly makes a point about The American Dream. I hope you'll watch it and see what you think of it.

The Queen of Versailles earns The Janie Junebug Highest Seal of Approval.