When I first started working at the nursing home, I loved going into Mr. A's room. He was a favorite of mine among the patients. Anytime I took something to him, he tapped his cheek and said, Give me a kiss right here, baby doll.

I was glad to oblige.

But one day he said, I need a physic.

I left the room puzzled. Physic? I asked the nearest nurse. What's a physic?

She said, It's an old-fashioned way of saying laxative.

I tell you this anecdote because it's important for your characters to use dialog appropriate for their time period. Word choice can also indicate a character's age.

F. Scott Fitzgerald referred to his alcoholism as "dipsomania." Writer Rose Wilder Lane (daughter of Laura Ingalls Wilder, who wrote the Little House book series) once asked her father about sayings used when he was young, which would have been in the 1880s. One of his responses was that if they thought someone was a good fellow, they would say that man was "all wool and a yard wide."

My parents called margarine "oleo." My children wore cloth diapers and my mother called the plastic pants they wore over the diaper "rubber pants." When disposable diapers were new, I often heard them called "paper diapers."

This Web site has a dictionary of words commonly used in the 1920s and '30s: http://www.1929anupperclassaffair.com/Flapperspeak.pdf

Do you remember some words and phrases that you used to hear regularly that have fallen out of fashion but would be indicative of a time period?

THE HEART OF A DOG

Our little family has suffered a loss. Stella died peacefully on Friday afternoon. 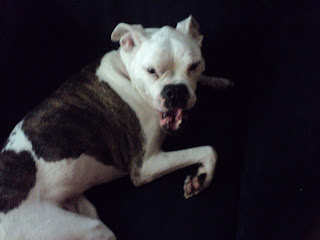 Stella was not my dog. She was Favorite Young Man's faithful friend.

But I knew Stella for many years. She first visited me about ten years ago when I lived in Illinois. She and FYM came to see us for a holiday.

When I moved to Florida, FYM and Stella lived with me for almost a year. She chewed on some of my furniture, for which I promptly forgave her.

She often stayed with me when my son had to go out of town.

I teased her about her smooshed-in face and told her she looked like she'd been chasing parked cars. I loved to kiss her right in the middle of the top of her head because that's where her fur was the softest. I let her sleep in my bed even though she was a bed hog. She had a thing about peeing on my rugs. I didn't like that, but how could I not clean it up and get over it?

Several months ago Stella moved in with me because she needed more care for health issues than my son could provide. Stella and I visited the vet together many times. She had a problem with a disk in her back. It caused her to drag her back legs. She often slipped and fell. The medicine she took for her legs damaged her liver, so she took medicine for her liver.

I knew the end was approaching on Thursday when her back legs stopped functioning almost completely. Then Friday morning, she began to vomit.

Friday afternoon, she sat in the chair next to me that she could no longer hop into on her own. I had boosted her up. When I realized she had stopped breathing, I kissed my favorite Stella spot on the top of her head one last time.

We are sad. We are so sad. Franklin and Penelope search for Stella.

I know it's saddest of all for Favorite Young Man. Stella was his beloved companion. He was her daddy.

She always gazed at him with her sweet brown eyes that showed exactly what was in her heart. She was absolutely and completely devoted to him.

Stella, you are loved forever. 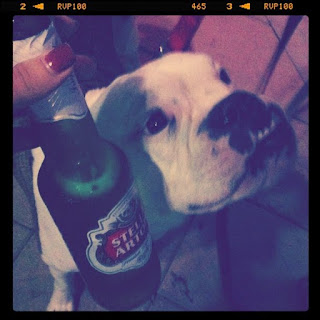 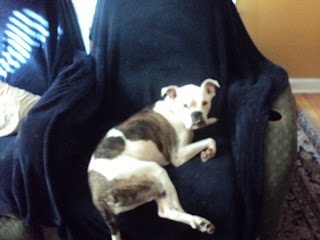 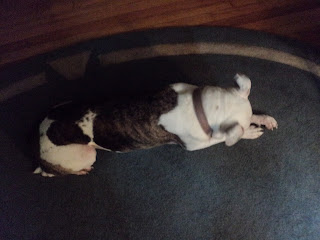 If you follow my blog and I don't follow yours, then it's probably because--for whatever reason--I haven't been able to find your blog.

Please leave the address of your blog in a comment, or email the address to me at dumpedfirstwife@gmail.com.

I like to stay in touch with as many of my followers as I can.

If you need an editor, I'm here for you!

It's the time of year that I try to watch DVDs that made a number of "Best of the Year" movie lists and movies that are likely to be nominated for awards.

Here's a sample of what I've seen recently:

Sully Remember the pilot who landed a plane on the Hudson River? He's Sully, and he's been a popular guy ever since. Now he's played by Tom Hanks in a movie that let's us in on the action when Sully made that fateful decision and saved the lives of all one hundred fifty-five people on board.

I love Tom Hanks. He's never bad. But I'm not crazy about this movie. It's a bit repetitive. It also turns the NTSB examiners into villains, which was not the case.

Sully earns The Janie Junebug Seal of Yeah You'll Probably Want To See It And Maybe You'll Like It More Than I Did Approval.

I watched Sully on a DVD sent to me by my good friends at Netflix.

Little Men A couple played by Greg Kinnear and Jennifer Ehle move into an apartment in a building left to them by Kinnear's father. Their young teenage son, who is very quiet and introspective, isn't thrilled about leaving Manhattan for Brooklyn until he becomes close friends with the son of the woman who rents the store in the building. The new owners of the building want to raise the rent on the store. Their dispute affects the friendship between the boys, who don't understand why the problem can't be solved.

Little Men is touching, and the acting is good, but I'm not sure why it's on so many Best of the Year lists. I'm not sorry that I took the time to watch it. Maybe I don't think it's that great because I don't understand something about it.

Little Men earns The Janie Junebug Seal of I Hope Someone Can Explain The End Of This Movie To Me Seal of Approval.

I watched this movie on Netflix Streaming. It's also available on DVD.

Sing Street I love, love, love this movie about an Irish teen whose arguing parents decide to split up, taken him out of his school, and send him to school in what is basically hell. In spite of all the shit around him, he manages to make friends and start a band. He even finds a gorgeous girl to appear in the band's videos and falls for her. His older brother, who encourages him and provides him with a proper rocker musical education, is his saving grace.

I watched this movie on Netflix Streaming. It's also available on DVD. Sing Street is not to be missed. I'll be thrilled if it garners some Academy Award nominations. It should be on the Best Picture list.

Janie Junebug, who will visit as many of your blogs as her eyes will allow.

Hello? Hello? Are you still there?

I thought today would mark my return to blogging. I even dreamed Saturday night about writing a blog post. It was a great post, too, but I can't remember the details from my dream.

But here I am on Sunday with a little time online, and my eyes can't take it. The ayes don't have it.

Following a sprained right wrist, a wounded right foot, and a leak in the kitchen, 2017 is starting to look up except for the fact that the light is too much for me.

Therefore, my blogging break continues. If you want to comment, I appreciate it, but I'm shutting down comments because if I read them, your thoughts will burn my eyes.

Now I need to take my migraine medication.

Here's a great cartoon from fishducky. It's perfect for Franklin, who makes new friends at the neighborhood park all the time. His latest lady friend is a Golden Retriever named Brenda. They are both fixed, so the relationship won't go beyond sniffs and tail wags. 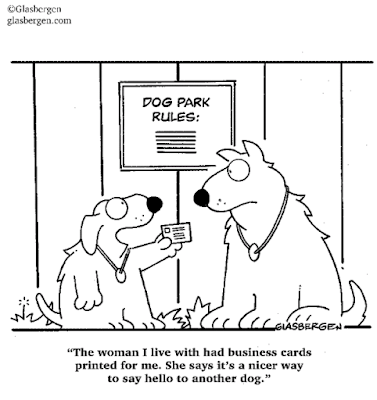