Today I present a movie I'd never heard of until susie of loonysuse recommended it to me. It's called Salmon Fishing In The Yemen (2011, PG-13, Available on DVD). 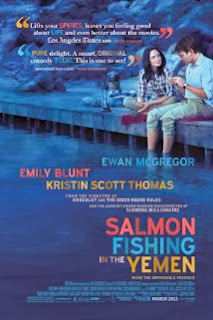 Sheik Muhammed (Amr Waked) wants to bring his beloved sport of fly-fishing to the Yemen, and he's willing to spend the money to do it. His representative, Harriet (Emily Blunt), contacts a British fisheries expert, Dr. Alfred Jones (Ewan McGregor), who says the idea is ridiculous. But then the Prime Minister's Press Secretary (Kristin Scott Thomas) hears about the scheme and exploits it as a story to distract people from trouble in the Middle East. Dr. Jones soon finds himself faced with what he believes to be an impossible task.

I am charmed by this movie. The Sheik is imbued with a lovely spirituality that brings peace to everyone he meets, even fussy Dr. Jones, who lives a rather unfulfilled life with an unhappy marriage. I especially like a moment when Dr. Jones realizes he can bring salmon to the Yemen after all: He's walking in a crowd of people, when suddenly he turns to walk the other way, as if he's swimming upstream. As Dr. Jones becomes more involved and excited about the fishing project, he can't help falling under the Sheik's "spell" and noticing Harriet's enchantments.

The one false note about this film is Harriet having a three-week fling with a soldier who is sent to Afghanistan, where he ends up missing in action and then presumed dead. One would think she'd been his lover for years, based on her reaction.

I must mention Kristin Scott Thomas. She's quite hilarious as the Press Secretary.

Here's what susie says about Salmon Fishing In The Yemen: I only own twenty DVDs and this is one of them.  It gets 5/5 fishies.

Spoiler Alert: ( My only beef (or salmon) with the movie was the excessive grief for the not-dead-soldier (spoiler.)  Harriet only knew him for three weeks! Spoiler Alert over and out.

This movie is perfect for a date night with the one you love, or to enjoy on your own, as I did. It's a movie that makes me feel good about the world, and I love the Sheik's sort of other worldly philosophy and glow. Salmon Fishing In The Yemen earns The Janie Junebug Highest Seal of Approval. Watch it when you're sick of Lifetime and ABC Family Christmas movies, which I calculate will occur in about seven minutes.