FRANKLIN FRIDAY: I HAD A BAD DAY

I gots to tell ya, I had a bad day. Mom gave me that shower she'd been saying I needed. She said I was stinky. That was ridicurous. I stunk good.

She called me to the backyard. I knew what was up. She had the shampoo and the hose with the special shower thing on the end.

I stood still because I'm a cooperative kinda dog, but I didn't like it.

The worst part is always when Mom lifts up my tail and washes my bottom.

When the humiliation was over, she dried me with a towel, but she said I was too wet to go in the house! I had to stay on the deck. That hurted my feelings.

So I licked myself dry.

Pissy Penlapee got a shower, too.
When we got to go inside, Mom put her arm around me and told me how soft and clean my fur was and we fell asleep with the nice sun coming in the window.
I liked that. I forgave her for the shower.
Okay I love you Bye-Bye. 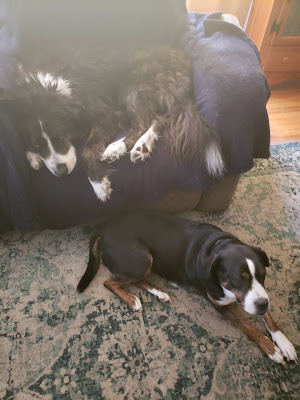 After a run of pleasant, warm weather, it rained and the weather changed. It's chilly and rainy. After Franklin and Penelope went out this morning, Penelope went back to bed.

I was afraid she was cold, so I put a sweater on her and covered her with her green blankie. To my surprise, she allowed me to photograph her. She's camera shy, as am I. 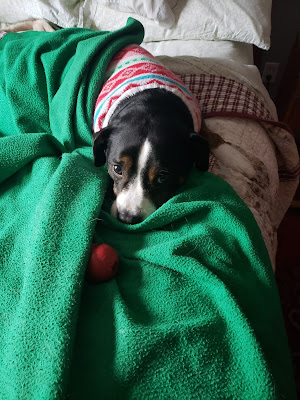 She looked so small and sweet. I made sure she had a toy in case she needed a little chew.

Franklin is larger, of course, but he's quite slender under all that fur. Here are old photos of  hair that accumulated during a brushing: 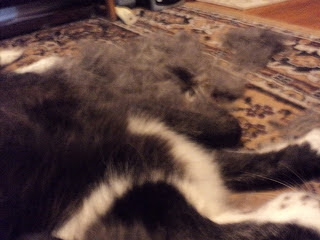 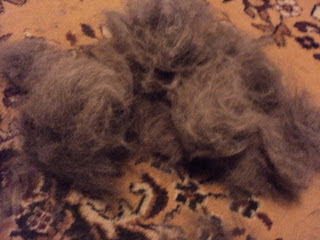 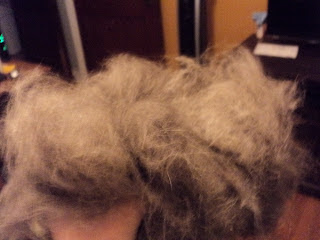 And here's a beautiful smile: 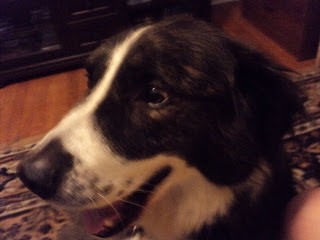 We hope you have a great week. Our sun should be back soon.

We do not have many visitors in our home because of the stupid virus, but when people do visit, they see me and make foolish noises. Then they squeal,

She has an underbite! Look at her cute toofers!

I am disgusted by such behavior. Why must they call attention to my toofers? Grandma (Carol) criticizes Mom Mom for not getting me braces. Ridiculous. Nothing is wrong with my toofers.

The only person I like––other than Mom Mom––is Auntie. She lives across the street. Auntie strokes my beautiful fur so nicely and never mentions my toofers.

I also liked it when Grandma lived with us because she shared her snacks with me. I enjoyed Cheetos and Skinny Pop Popcorn.

I do my best to keep my toofers hidden, but I can't help showing them when I smile. 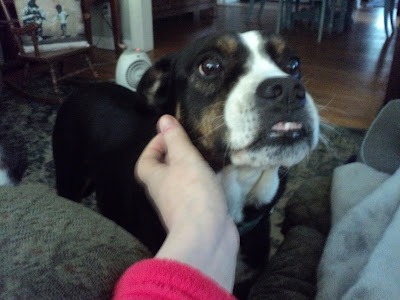 I allowed Mom Mom to take this photograph because she was scratching my neck. I shall never permit her to photograph my toofers again.

When the hideous virus goes away, you may visit us as long as you do not mention my toofers.

If you bring them up, I shall call you simple-minded and give an interview about you to Oprah. You must obey me. I am Her Royal Highness The Duchess Of GoSuckIt.

That is all. Go home now. Do not poop in your neighbor's yard on the way.

I saw the maxillofacial surgeon yesterday. Dr. Zane Khan said I don't need surgery. That's a yay! While checking out I mentioned how impressed I was with everyone there (polite, kind, professional). The person at the desk said, We take our lead from Dr. Khan.

That's as it should be.

My stimulus check is in my account, so that's another yay! I've done my part to stimulate the economy by ordering two sets of glassware for my kitchen, two curtain panels for my bedroom, and two t-shirts for my bod. The rest of it, which is most of it, will go to paying bills.

But along the lines of two things are better than one, that includes dogs. I took this photo of Franklin and Penelope on Christmas. Although Penelope was on Franklin's bed, she looked shocked when Franklin flopped down next to her. 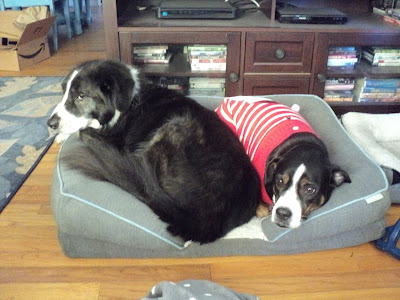 We have another very large yay! I applied to refinance my house back in early December. It's been slow going because interest rates are low and, of course, because of COVID, but it's complete. I have a lower interest rate on a 20 year loan.

I was especially pleased and surprised when the appraisal came back at 50k more than I'd estimated for The Little House On The Swamp. New windows, here we come

We hope you have lots of yay! in your lives, too. 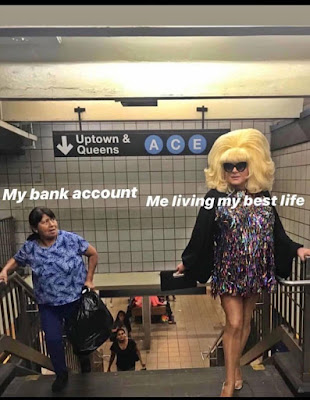 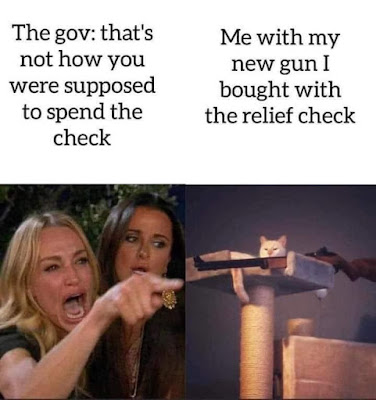 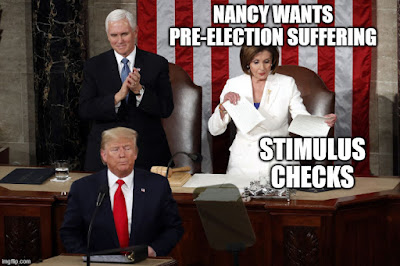 WHAT TO WHICH WE HAVE BEEN UP

You already know about our Monday if you read my previous post, and if you didn't read it, that's fine. Go back to sleep.

I have decided to return the new thermostat, although I'm no longer angry with it. It functioned as a dog guide would when the dog refuses to cross the street with the blind person because the dog knows the street involves complicated instructions and has wiring and is difficult to put up on the wall successfully. I was convinced of my infallibility after hooking up and repairing some stuff. I've decided, however, that my abilities do not extend to something that involves wiring. The new thermostat spurned my advances, thus keeping me safe. The air conditioning worked fine after a visit from Son Of Dean. If the heat continues to act up in the future, I'll request assistance.

Today was again sunny, but a little cool. I didn't accomplish much after staying up late the last two nights.

On Sunday I finished my taxes. Hallelujah. I didn't get much of a headache, and I'll get a bit of a refund.

I'd been saying that if Harry and Meghan wanted their privacy, then they shouldn't have agreed to an interview with Oprah. I watched anyway and understood why they agreed to talk. I grasp the desire to say, That's not true. I didn't do that. Quit lying about me.

Sometimes we have to defend ourselves, especially when family refuses to do so and might even choose to believe the lies no matter the evidence.

The sun and I drained Lake Junebug, but the mud remains. This afternoon Franklin rubbed his neck and one side in the muck. He smells nasty and will need a shower.

I'm sorry to tell you that Carol's great-granddaughter is still blind in one eye and has little sight in the other. Carol said the young lady's hands also shake badly. Damn COVID all to hell. Damn the former president who allowed it to run rampant.

I put power steering fluid in the car and it no longer moans and complains. That's a triumph.

I got the second dose of Shingrix on Friday, in spite of a pharmacy tech who couldn't seem to do anything right, which included his inability to cover his nose with his mask. After much blather and repetition from him, he finally figured out I have insurance. I confess I became annoyed after the 10th or 12th time he told me my insurance card would have a bin number and Rx on it and mine didn't have it. When he came out from behind the barrier to talk to me, I became disgusted and told him to cover his nose.

Carol called yesterday to tell me she heard on local news that next week the vaccine will become available to people older than 60. I have to wait four weeks after the Shingrix shot to have the COVID vaccine, but at least when those weeks have passed, I should be able to get my shot. Woo-hoo to that and woo-hoo to you.

Now it's time to warm up some supper. I have some bills to scan and paperwork to fill out related to the attack so now that my taxes are done, that's the next item on the agenda.

Our Monday was sunny, but a cool breeze blew.

Franklin and I started the day with a visit to Lowe's, where Franklin is always admired for his beauty and good manners. At the cash register he stood so still while we waited our turn that the lady behind us asked, How do you get him to do that?

He just does it.

We were there to purchase two items. The first was a thermostat. Mine has been behaving strangely. I replaced the batteries in it and it still didn't register the correct temperature in the house. When I turn on the heat, it runs and runs and runs because the thermostat insists that the house is colder than it is. I rely on space heaters for the most part, but it's a good idea to have an accurate thermostat.

So we got home with the thermostat. I opened the box and glanced at the instructions. The first item on the agenda wasn't in the instructions but I knew it must be done. The cover had to be separated from the base.

I couldn't get them apart. I argued with it and swore at it. No luck. So we went to the garage and pulled out a screwdriver, which popped them apart. The thermostat respected the screwdriver but didn't respect me.

Then I studied the instructions. Oh, dear god. Wires and millions of things to do. I thought putting up a new thermostat would be simple and instead the task seemed daunting.

The new thermostat is on the dining room table. I'll attack the job when I'm alert and well rested and haven't just had an argument with the device.

The second item we purchased was a plug for the bathtub. The metal plug that was in the tub and closed with the turning of the little handle thingy didn't fit very well. I took baths a few times after I moved here and slowly lost my water.

After a while I replaced it with one of those shroom things. It's not a plug. It captures hair to keep the drain from clogging.

But recently I read a post by Anne at The Gods Are Bored about how she loaded up with water before a hurricane. It made me think about Texas and so many people not having water. Before big storms, I fill every pitcher and Tupperware bowl with water. I've never needed it, but what if I did? I should start filling the bathtub, too.

So now we have a plug.

What else happened? Oh! When we pulled into the parking lot at Lowe's, two very large Canadian geese (at least that's what I think they were) were chilling at one end of the lot. I wanted to take their picture so our resident Bird Man, David, who blogs at  Travels With Birds could tell me if they really were Canadian geese and fill me in on their lives, what they like to eat and how they behave and all that.

But when I got close enough for a photo, I pissed them off. They arose and stomped off, honking all the way. I didn't take a picture at that point because it would have been of their butts.

The rest of the day was pleasant. Franklin and I walked. Penelope and I talked. We enjoyed the sun. I read some. I cleaned some. Did a little laundry.

It was a good day in spite of the new thermostat's disrespect and argumentative nature. Maybe it will be better behaved after this time out on the dining room table, where it is nothing special.