THE SLAP HEARD ROUND THE WORLD 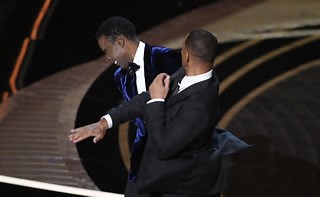 I didn't see the Academy Awards until Monday night. I don't have live TV. So all day Monday I avoided the news. I did hear a man at work say something about Chris Rock that sounded odd. I paid it no heed.

By Monday evening the show was streaming on Hulu and I was ready to watch and be surprised by the choices the Academy made. I enjoyed the show.  Wanda Sykes, Amy Schumer, and Regina Hall were great, proving that the show needs a host, or three. Their bits were brief; they kept the show moving.

Finally, we reached the award for the best documentary. Chris Rock took the stage.

He tossed off a few jokes, including one about Jada's hairless head. Will laughed; Jada rolled her eyes.

Will charged the stage. 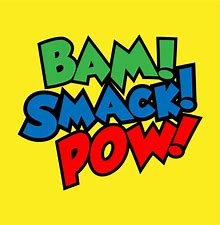 The sound cut out, and then the picture. Will really had smacked the shit out of Chris Rock.

I thought the show would come to a temporary halt while officers removed Will Smith.

Instead, he won his Academy Award for Best Actor and gave a tearful, self-serving speech cooked up by a publicist and didn't even apologize to the man he hit.

I don't know how Chris Rock finished presenting the award.

I felt sick to my stomach and couldn't enjoy the rest of the show.

Some lovely women I know who have problems with a lack of hair were offended by Chris Rock's joke. I have thin hair and do my best to hide it with hairstyles. But it was the slap that bothered me. I spent my childhood and youth being slapped. Seeing some violence in a movie doesn't bother me (I rather like the choreographed violence in Tarantino movies). That slap –– that bothered me and it still bothers me; hence, I write about it a week after the event.

Chris Rock said he didn't know Jada Pinkett Smith has alopecia. I didn't know, either, although numerous articles said she's open about it.

She happens to look gorgeous with her head shaved, but if it bothers her so much, she could have worn a wig. Plenty of people who have alopecia do. She also could have found a way to defend herself using words at an appropriate time.

I believe the hosts also made jokes about the Smiths earlier in the evening. I don't remember what they said. A lot of people comment on the Smiths because of Jada's "entanglement" with another man, though Will insists there's been no infidelity.

If you don't want to face the possibility that someone will make a joke at your expense, then don't go to the show. Jokes are always made about the luminaries in attendance.

What Chris Rock said might have been in poor taste, but what Will Smith did was a crime.

If I went up on a stage and hit someone, I would be arrested. So would you. Why wasn't he?

I don't agree with the people who say Will re-enforced stereotypes about Black men. Will Smith does not represent Black men. He represents Will Smith, and Will Smith is an asshole. Jada smiled/laughed when Will hit Chris Rock. Their son, Jaden, tweeted

And That’s How We Do It

so they are a family of entitled assholes who think that physical violence is the way to happiness and self-satisfaction.

Will Smith ruined the presentation of the Best Documentary Award that should have been a golden moment for Questlove. and his fellow winners. He ruined the Best Actor Academy Award presentation.

And I wasn't the only person who found that slap a triggering event.

Will has resigned from the Academy. I don't know what else will or should happen to him, but he sure didn't deserve a standing ovation when he went up to collect his Oscar.