Today we're going all the way back to 1998 to consider The Mighty (PG-13, Available on DVD, Available on Netflix Screaming TILL JAN. 1). 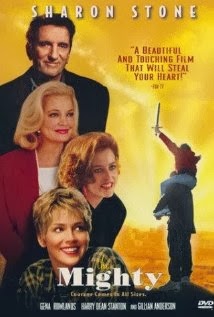 I decided on The Mighty for this week's choice because it's available on Netflix Screaming only until Jan. 1, and because you might want to watch it with your kids while they're out of school. It's NOT a movie for young children, but I think it's okay for youngsters of about 10 and older, with supervision. It has some violence. In fact, this film has quite a few bullies, so it could make for some good discussions.

Maxwell Kane (Elden Henson) lives with his grandparents because his father killed Max's mother when he was quite young. Now he's a very large young man who has difficulty reading, and he's picked on to the point that I don't know what keeps his blood from boiling. Kevin Dillon (Kieran Culkin), who is very small and walks with braces and canes because of a devastating disease, moves in next door to Max. Kevin, a.k.a. "Freak", becomes Max's reading tutor, and they start their work with a book about King Arthur. Kevin teaches Max what it is to be a Knight of the Round Table, and together, they soon become a mighty pair, with Kevin high in the air on Max's shoulders.

I'm surprised I had never seen this movie, but I remember hearing about it when it was released. I like it. It's sad, but, ultimately, it's uplifting. These two boys change each other's lives. Kieran Culkin may not be as famous as his Home Alone older brother, but he's very good, as is Elden Henson. I didn't cry at the end, but some people who comment about it on IMDB feel it's a two or even three hankie movie. I don't have any children hanging around to watch movies with me, and I've stopped stealing children off the streets to be my movie buddies because their silly parents complained. But I'm sure this is a movie I would have allowed The Hurricane and Favorite Young Man to watch–not Middle Child, though, because she was grounded.

I love the Arthurian images throughout the movie. The Mighty also employs two of my favorite themes: the interconnectedness of humankind and writing one's own life.

A warning: Max's father, "Killer" Kane (James Gandolfini), is paroled during the course of the movie. He kidnaps Max, and he be scary. Although The Mighty doesn't have much graphic violence, Gandolfini's demeanor makes Tony Soprano seem kinda sweet. His part is small, though.

My only complaint about this movie is that if you look at the photo I stole lifted borrowed from IMDB, you can't tell that this movie is about Max and Kevin. Why are all those actors with much smaller parts featured so prominently? I guess some idiot moron suit at the studio thought that Culkin and Henson wouldn't be a draw, but it makes the photo misleading.

I say, You go, Max and Kevin! I like you. The Mighty earns The Janie Junebug Seal of Approval.

It's not a long movie. Watch it on Screaming while you can, or go ahead and seek out the DVD.