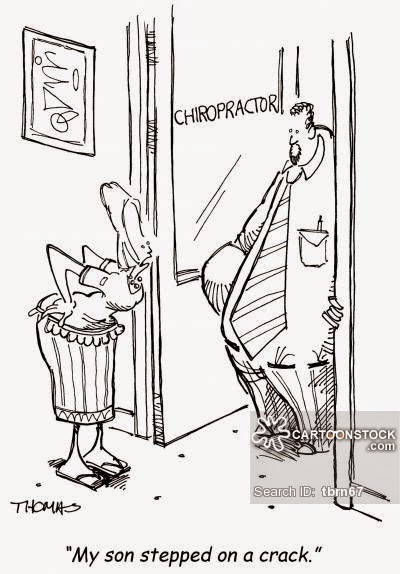 Yes, the title is a pun.

My favorite shot from Mad Men has always been Betty Draper with a gun and a cigarette in her mouth, shooting her neighbor's pigeons. I don't remember what season it was, but it was pretty early on.

Oh, and she was wearing a nice nightie. 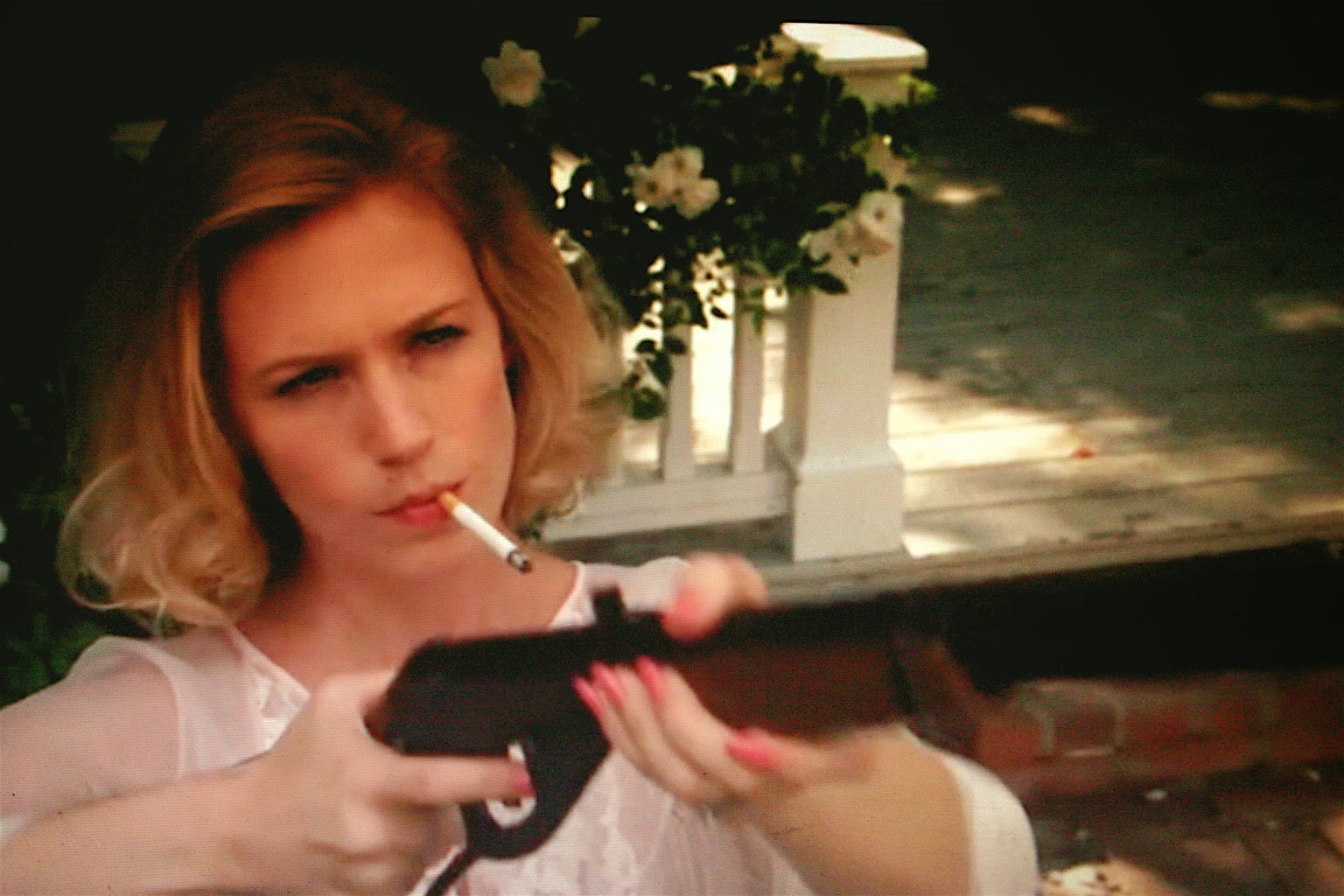 Ya don't mess around with Bets, formerly nicknamed Birdie by her first husband.
Posted by Janie Junebug at Wednesday, April 29, 2015 30 comments

BRANDON ALERTS US TO AN ERROR

Our dear friend and client Brandon Ax has alerted us to an error made with dowloads of his first two books:

Recently, people who ordered the Kindle edition of Elemental, his first book, instead received Ashes. 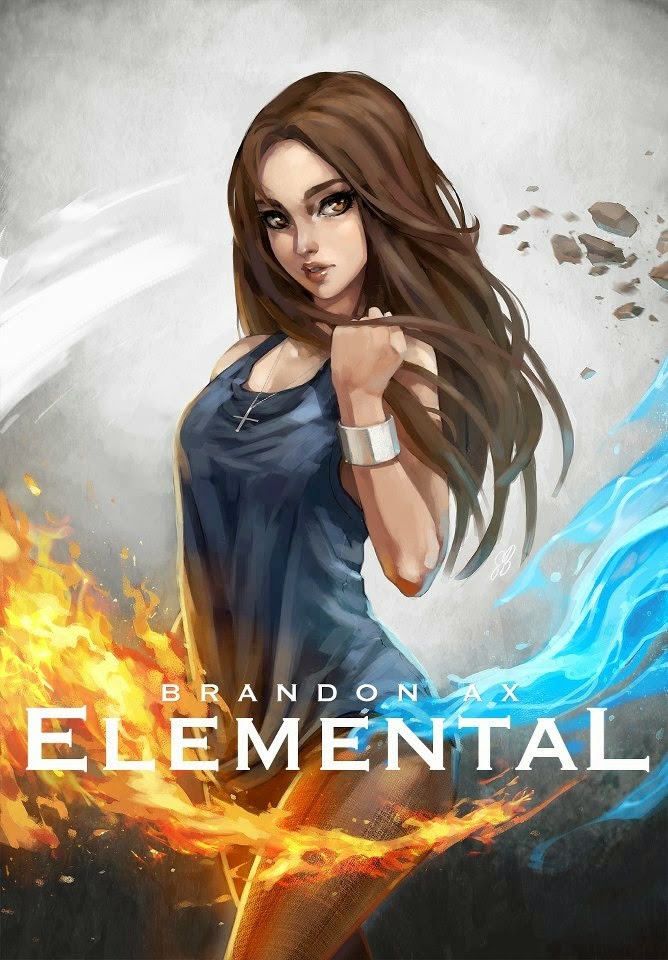 Elemental is now available on Amazon for updating, in case you purchased it and received Ashes instead. Poor Brandon doesn't know what went wrong, and is having difficulty getting answers from the mighty Amazon.

its too much
its all too much
every time one dies

and so
every single day
begins with the mourning
Posted by Janie Junebug at Friday, April 24, 2015 47 comments 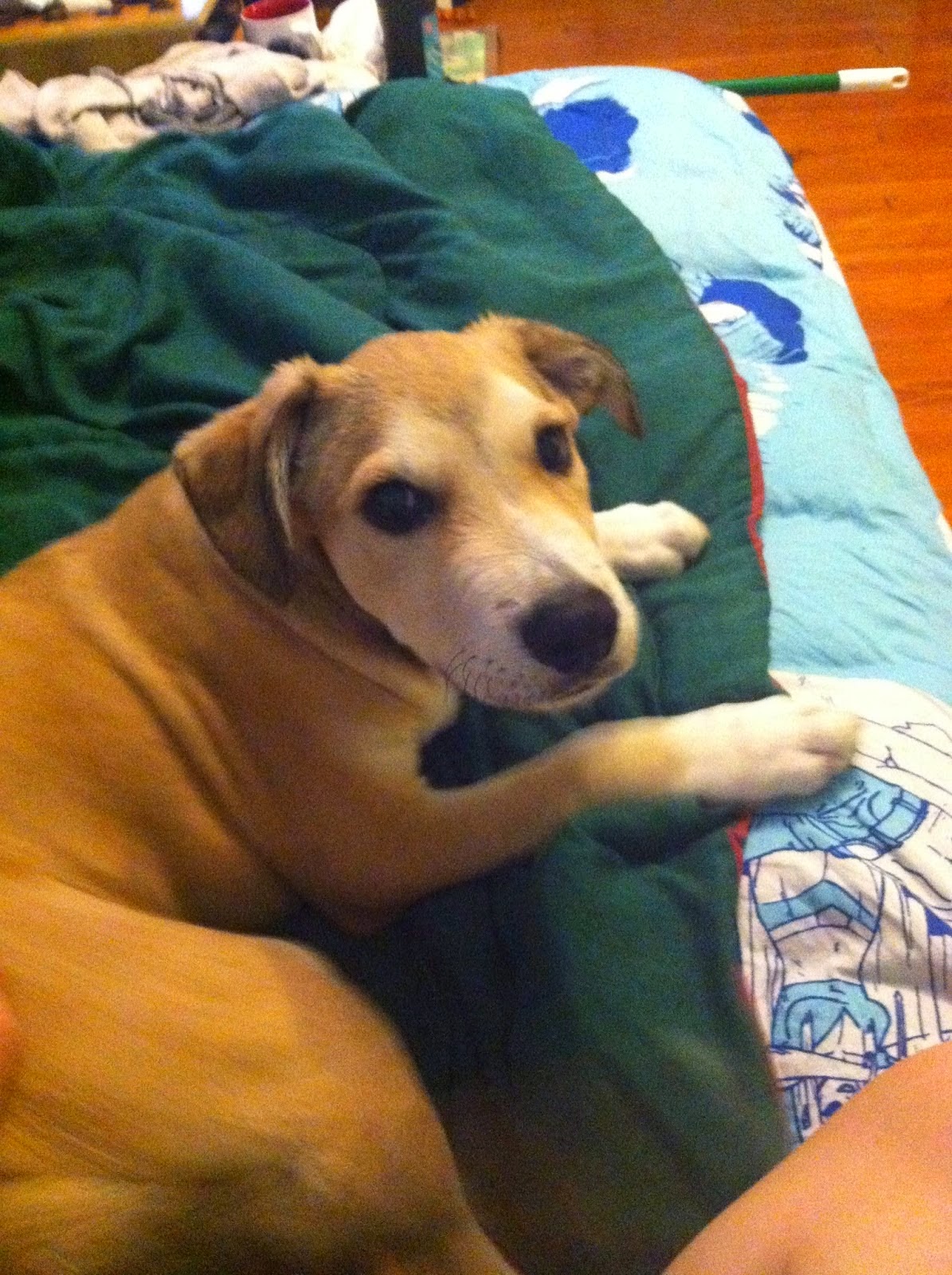 Isn't he a beauty?

His family found him wandering the streets, all alone and in need of care. He's very young.

Before he could get his shots, he came down with Parvovirus––a very serious condition.

I thought it couldn't hurt to mention that a GoFundMe campaign has been set up to take care of little Wicket's medical expenses. I donated. I'm not asking you to do so. I'm merely mentioning that poor little Wicket is in need.

Check out the GoFundMe campaign to help Wicket beat the Parvovirus.

You can read more about Wicket and see him with his dad at http://goo.gl/1UQwv8.


Infinities of love to Wicket and the good people who have taken him in,

CAROL'S DAVID PUT TOGETHER MY HAMMOCK

Today my buddy Carol's David, as opposed to someone else's David, came over to put together my hammock and help me with some other stuff because he's good at those things and I'm not and I pay him money.

After he finished the hammock, I insisted that he test it. He begged me to run in the house to grab my teddy bear and camera and take the following photos of him, which I already posted on Facebook: 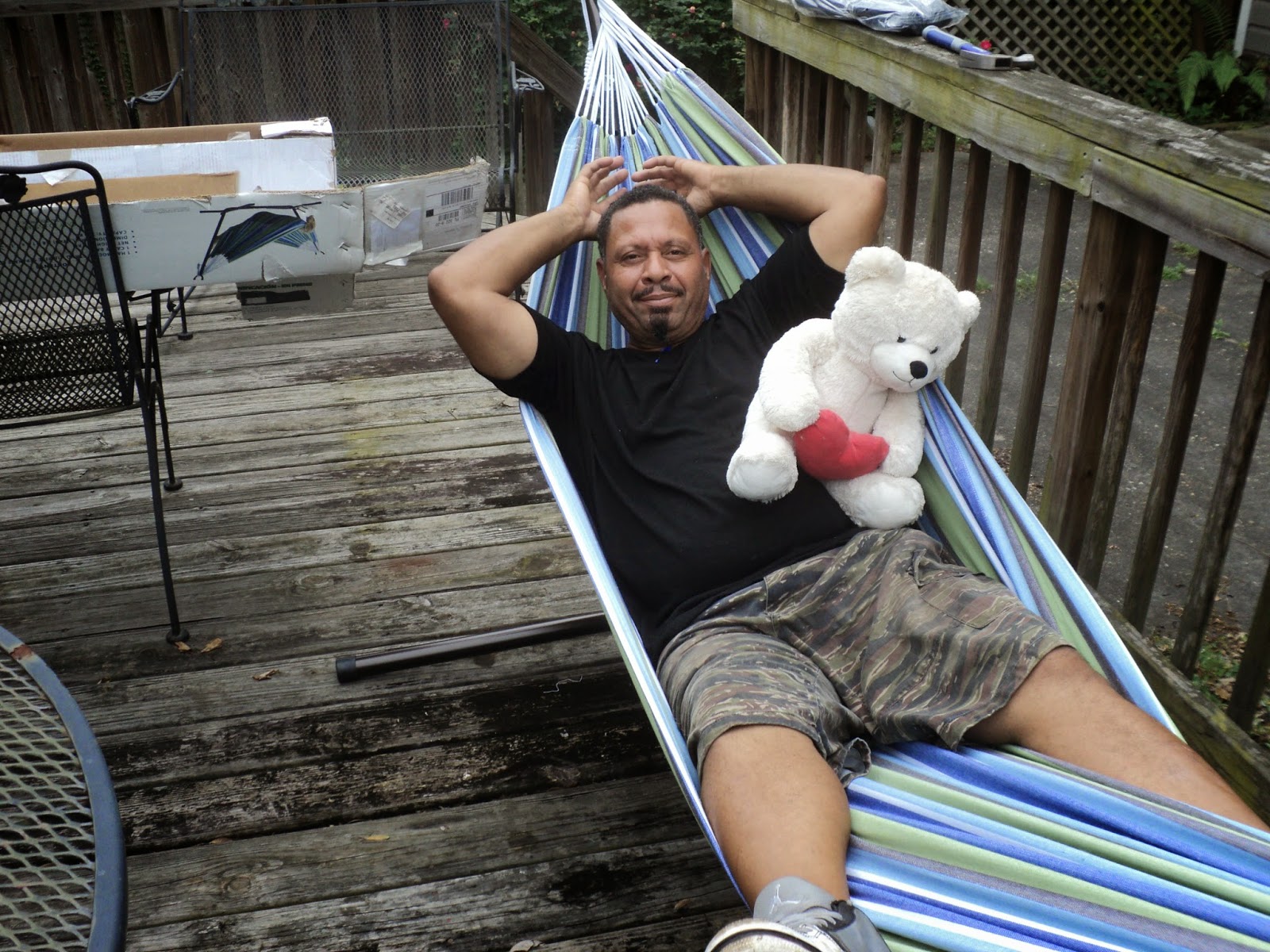 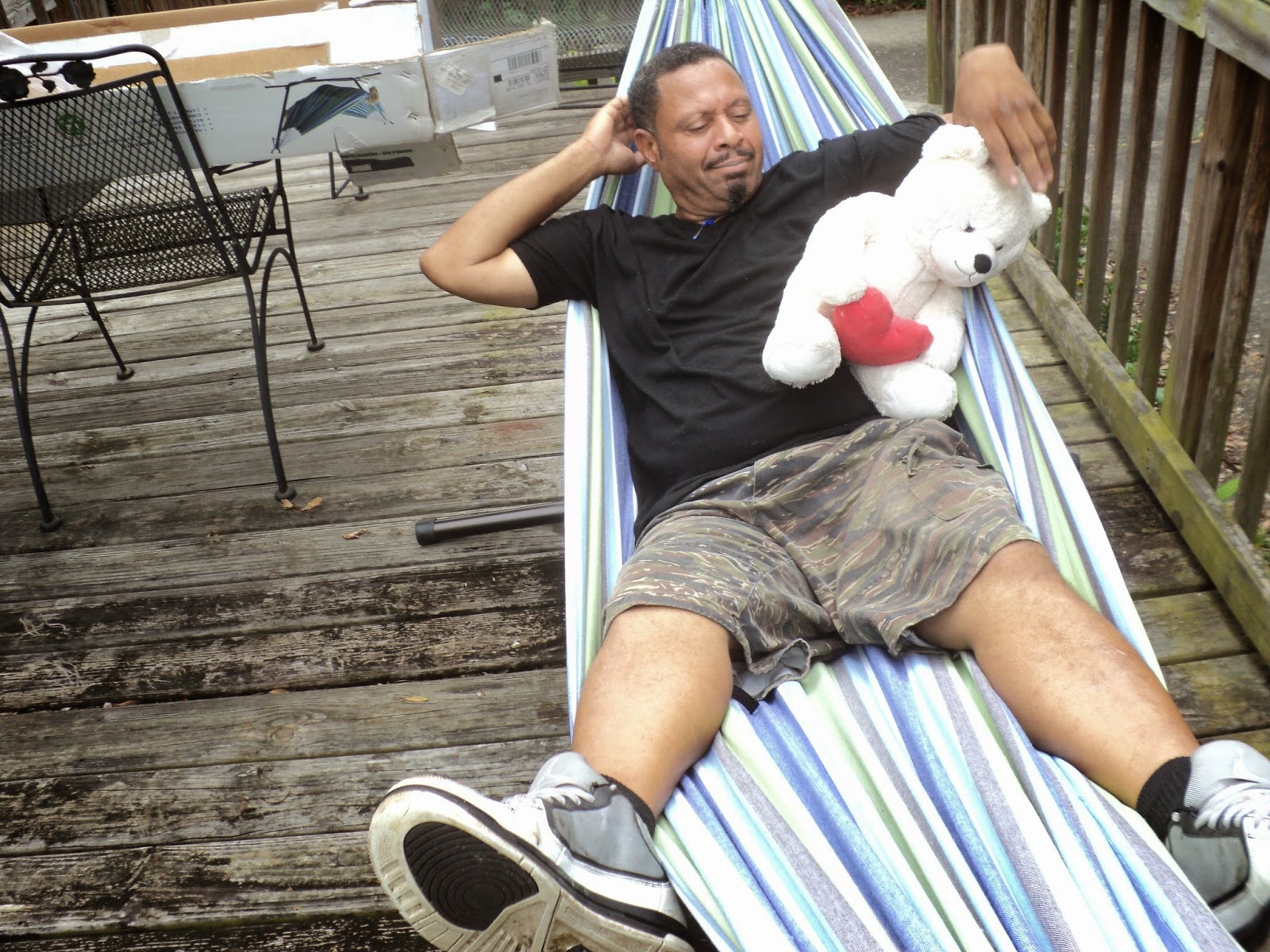 I am now a little bit afraid that Carol's David will never help me out again. (He is Carol's David because he is her son. I hope that eliminates any confusion.)

So, anydavid, if you live in or around Jacksonville, Florida (during the winter), or in or around Milwaukee, Wisconsin (during the summer), and you need a superior carpenter and all around great guy who even took me to the post office to send a box to The Hurricane that was too heavy for me to carry, let me know. I'll help you get in touch with him so you can hire him.

Man, his foot looks gigantic in that second photo.

I thank you for your kind attention to THIS POST about Brandon Ax's books. His sale on the first two books in the Light Bringer saga runs through tomorrow, which is Tuesday, April 21st.

I'm quite proud to be Brandon's editor. It makes me happy when you buy his books. His plots are so interesting that I can't help smiling while I edit his books, except when the story gets a little scary and then I use my anxious face.

P.S. I miss you all. I am hard at work and hope to return to you on a regular basis some time during May.
Posted by Janie Junebug at Monday, April 20, 2015 42 comments

My beloved young author Brandon Ax has a cover reveal for you. He hopes the book will be out during May. I am proud to be his editor. I love it when Brandon and his cute little dragon deliver manuscripts to me. The dragon, whose name I can't remember, never burns me. 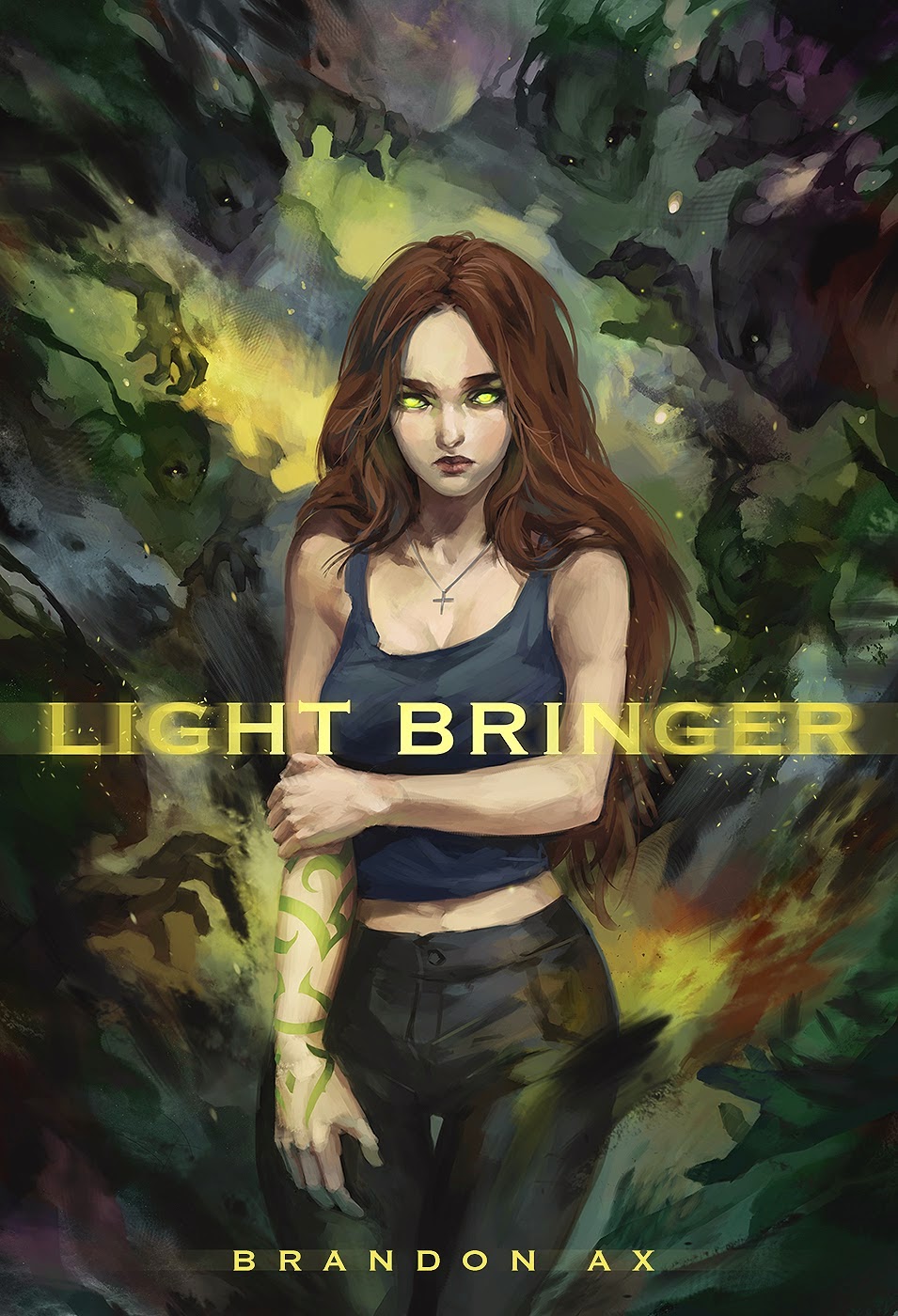 Brandon also currently offers sale prices on his first two books so you can get caught up in the world of the Light Bringer Saga.

As for the Junebug, I am not big on fantasy/science fiction, etc., but I enjoy Brandon's books. His plots are excellent. I'm fond of his characters. They have become my friends.

Pass on the word, please, that Brandon will have a new book out soon, and his first two books are on sale.