MY DECLARATION OF INDEPENDENCE

Yes, I know yesterday was July 4th, but I'm writing this yesterday so my title is appropriate.

Here's what I've decided to do about Woody Allen movies:

I'm not going to stop watching the movies he made that I love, such as Annie Hall, Manhattan, Radio Days, Hannah and Her Sisters, and Midnight in Paris. Art can transcend the artist.

However, I'm not going to watch any movies that he makes in the future. I'm also not going to purchase any of his movies on DVD.

I believe Dylan Farrow, who has a very specific recollection of him molesting her when she was a child. I don't care that he was acquitted. So was O.J. Simpson.

Her brother Ronan also stands by her, and he played a big part in breaking the Harvey The Rapist news (I'll be writing more about that very soon).

I'm going to continue watching movies made by Harvey Wienerstein's company because I don't think he'll ever make another movie––may he rot in prison with Bill Cosby. 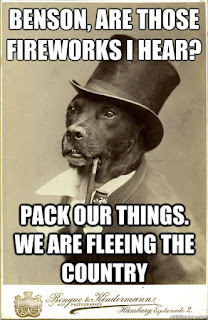 Franklin, Penelope, and I are quite miserable because of the fireworks. 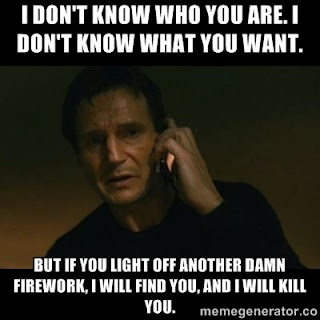 Don't get upset or worried. I've never been raped or attaacked.

When I was younger, I got a lot of catcalls. Men came on to me in the grocery store even when I had a toddler with me and was wearing my wedding ring.

The "interest" from men was the worst when I was a reporter. Sometimes men I interviewed made suggestive remarks. A couple of guys followed me out to my car and didn't want to stop talking, apparently in the hope that I'd be so interested that I'd follow them to their beds.

A publisher once grabbed me by the arm––roughly––and I gave him holy hell in front of the entire newsroom and told him to never touch me again. He was quite respectful and careful after that. However, this anecdote doesn't mean that I think all women can get out of such situations as easily as I did. I wasn't worried about losing my job. I wasn't worried that I wouldn't be promoted.

My mind is on #METOO and it has been for quite some time. I have no problem with giving up reruns of Bill Cosby's sitcom because I didn't watch them anyway, but what do I do about the Woody Allen movies I love? What about Harvey Weinstein movies? Am I still able to separate the artist from the art?

On that note, I want to repeat a post I wrote a long time ago. I'll also be following up on this subject, so my #METOO will be continued. And if you'd like to share #METOO stories in a guest post on my blog, please email me at dumpedfirstwife@gmail.com.


I promised you a work of art that achieves transcendence despite its creepiness factor and here it is: Manhattan

, starring Woody Allen, Diane Keaton, and Mariel Hemingway.
I LOVE this movie.
The glory of Gershwin, the sweet loveliness of young Mariel Hemingway, the skyline of our beautiful city. This film is a love affair with New York, in glorious black and white.
Its creepiness factor? Woody Allen's character, Isaac, is having an affair with 17-year-old Tracy, played by the oh-so-innocent looking Mariel. It become even more creepy knowing that Woody had an affair with his now wife when she was quite young (she's still very young), and she grew up with Allen as the father figure in her life.
Who has an affair with the daughter of his longtime girlfriend with whom he's had a child and lets Mama find out when she discovers nude photos of her daughter in her "husband's" apartment?
Woody Allen.
We all know it. We know it's wrong. But somehow most of us look past it (it's o.k. Mia we still love you) and we still love his films.
I am extraordinarily fond of Annie Hall

that I truly adore.
It's magic.
I read on IMDB that Woody offered to make another picture for free for Universal if they would shelve Manhattan

. He supposedly thought it was terrible and the worst thing he had ever done.
I hope he got over it, and if he didn't, then I disrespectfully disagree with him.
Isaac Davis: Chapter One. He adored New York City. He idolized it all out of proportion. Eh uh, no, make that he, he romanticized it all out of proportion. Better. To him, no matter what the season was, this was still a town that existed in black and white and pulsated to the great tunes of George Gershwin. Uh, no, let me start this over.
Isaac Davis: Chapter One: He was too romantic about Manhattan, as he was about everything else. He thrived on the hustle bustle of the crowds and the traffic. To him, New York meant beautiful women and street smart guys who seemed to know all the angles. Ah, corny, too corny for, you know, my taste. Let me, let me try and make it more profound.
It's profound, Isaac.
Splendor in the skyline, glory in the concrete. I love New York. And it just doesn't get any better than Rhapsody in Blue

I published this post on Sept. 21, 2010. Prior to writing this defense, I wrote a post about One Flew Over the Cuckoo's Nest that you can read HERE if you're so inclined.