PEGGY SUE GOT MARRIED NOT LONG AGO

Sixty years ago on this date, a small airplane took off from Mason City Municipal Airport (Iowa). About five miles away from the airport, it hit the ground at full speed near Clear Lake, Iowa, in a cornfield. 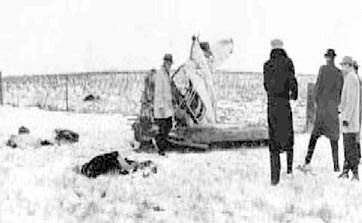 The pilot, Roger Peterson, and his three passengers––Charles Holley*, Richard Valenzuela, and J.P. Richardson––were all killed on impact.

The three musicians were on a tour across the Midwest called the Winter Dance Party. They finished their show in Clear Lake at about midnight. Their flight took off around 1 a.m. 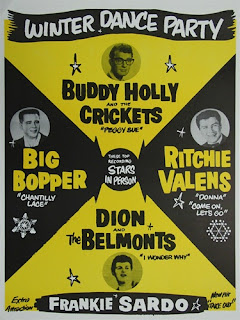 Holly chartered the plane because the troupe's two tour buses were unheated and kept breaking down. His drummer had to be hospitalized because of severe frostbite. He was tired, no one had been paid, and he wanted to get to the next venue in Minnesota ahead of time so he could get some rest and do his laundry.

He planned on taking the two remaining members of his band with him, but his guitarist, Tommy Allsup, agreed to flip a coin with Ritchie Valens for a seat on the plane. Valens "won" the toss.  Waylon Jennings, who played bass for Holly, gave up his seat to Richardson because The Big Bopper had the flu.

Don McLean wrote and recorded a hit song, American Pie, that led to the tragedy being memorialized as "the day the music died." However, McLean has said that the song is about more than the deaths of the three performers; it's about the loss of America's innocence (something we supposedly lose on a regular basis with each new tragedy).

And of course, the music most certainly did not die because of the influence the musicians had––especially Buddy Holly.

The Big Bopper was primarily a radio disc jockey who had a hit with the novelty song Chantilly Lace. He also wrote some successful songs recorded by other artists. He left behind a wife, a daughter, and a son who was born two months after he died.

Valens had a brief career. He had recently dropped out of high school because of his newfound success. He's considered to have started Chicano and Latino rock. He influenced Los Lobos and Carlos Santana. He left behind his mother, several siblings, and a girlfriend named Donna, about whom he had written a hit song. Among his effects was a silver bracelet with her name attached.

And then there was Buddy Holly, known as a rock and roll pioneer. A certain band called The Beatles chose their name because Buddy Holly's band was called The Crickets. Paul McCartney owns Buddy Holly's song catalog. Two nights before Holly died, a young Bob Dylan saw Holly perform in Duluth, Minnesota, and has cited Holly as an important influence in his development as a musician. Mick Jagger also saw Holly perform, albeit not in Minnesota but in England. Other performers who name Holly as an influence include Elton John, Bruce Springsteen, Eric Clapton, and The Clash.

Holly was already such a prolific songwriter and had recorded so many songs that his record label was able to release "new" Buddy Holly music for 10 years after his death. He left behind his parents, three siblings, and a pregnant widow, Maria Elena Santiago-Holly. Her miscarriage the day after learning of his death by hearing it announced on television is allegedly the reason that deaths are no longer broadcast until family has been informed.

Buddy also left behind his trademark horn-rimmed glasses. The farmer who owned the field found them after the snow melted. He gave them to the authorities, who stored them in a courthouse for years before realizing what they had and returning them to his wife. 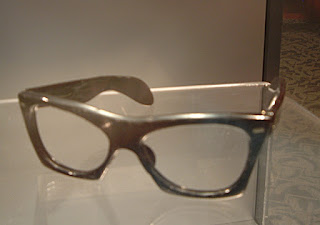 They're on display at The Buddy Holly Center in Lubbock, Texas.

Today is the day that three musicians died in a plane crash, but they didn't take the music with them. Sing us out, please, Buddy.

*The correct spelling of the musician's name is Holley. A recording contract misspelled his name as Holly. That's the spelling he used for the rest of his life, but the marker at his grave uses the correct spelling. His nickname had been Buddy since childhood.

Feature films have been made about Buddy Holly and Ritchie Valens. Both are filled with inaccuracies, but are entertaining.