Today I present two movies for your consideration. Neither one is brilliant, but both are interesting enough to be a distraction when you just want something to watch. 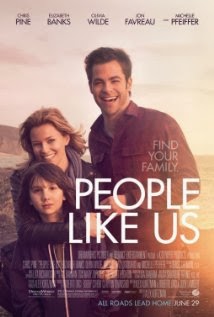 Sam (Chris Pine) goes home for his father's funeral to see if any money is coming his way. He's a little bit of a sleaze. He learns that his father left a large sum of money to someone named Josh Davis. Sam seeks out Josh (Michael Hall D'Addario) and finds he is a fairly young boy, living with his recovering alcoholic mother, Frankie (Elizabeth Banks).

This movie is pretty predictable, and the acting is mediocre, with the exception of young D'Addario, whose performance I enjoyed. People Like Us is worth watching to see the changes in Sam, and really worth watching for a brief sequence at the conclusion. This one little aspect of the film really touched my heart.

You can probably let children about 12 and older watch this movie. 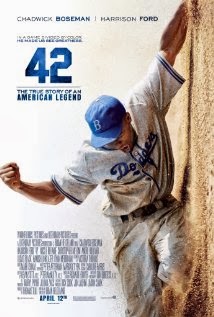 This movie is a bit better and can be used as a teaching tool about segregation because it tells the story of Jackie Robinson (Chadwick Boseman) "breaking the color line" when Branch Rickey (Harrison Ford) signs Robinson to the Brooklyn Dodgers.

I expected a more tense atmosphere in this movie. Many white people were furious to see a black man playing on the same team with white men. Previously, black men played in the Negro Leagues. Moreover, some of the other Dodgers didn't want to play with Robinson.

Perhaps it's better that 42 is understated and controlled, because Robinson had to control his temper at all times and not give anyone a reason to belittle him. I particularly like a scene in which Rickey must encourage Robinson to face up to his detractors and take the field. Rickey is portrayed as insisting he has no interest in changing the face of baseball. He simply wants the best players. In reality, though, Rickey is out to make a dent in racism.

42 is probably a movie you will want your children to see–maybe children aged 10 and older.

People Like Us and 42 have The Janie Junebug Seal of Approval. I realize I'm not slobbering with joy over these films, but both are good. They just aren't fantastic, and, thus, slobber worthy.