THE BURNING BED, OR HOW TO KILL YOUR EX-HUSBAND IN 3 EASY STEPS

I didn't see The Burning Bed when it first aired on NBC in 1984, but I certainly heard about it. 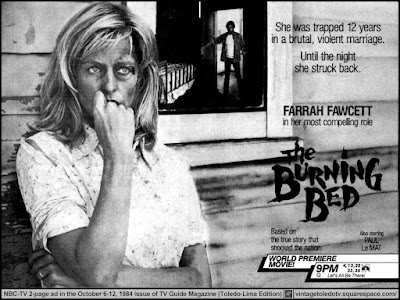 Based on the 1980 non-fiction book by Faith McNulty, it's the story of Francine Hughes, just another battered wife––until March 9, 1977, when she set fire to the bed where her drunk, passed out ex-husband, Mickey Hughes, slept.
At age 16, Francine dropped out of school to marry James "Mickey" Hughes. 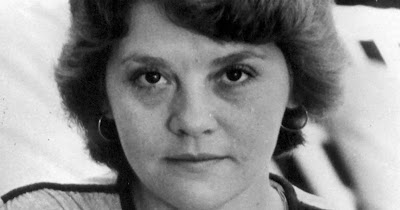 Four children and god only knows how many beatings later, Francine couldn't get any help from the police because they didn't see him hit her, and never mind the marks of his hands around her neck and the bruises.

She was told all the typical shit women hear:

She managed to divorce him in April, 1971, so she could get welfare, but he ignored the divorce and said she couldn't keep the kids from him. That summer when he was seriously injured in an accident, she felt she had to help him. In return for her kindness, the abuse worsened. She had gone back to school to take a secretarial course. On that last night, he knocked her around and forced her to burn her school books. She called the police. Yet again, they refused to help even though he stated in front of officers “it was all over” for her. Later, he raped her and beat her.

“I was thinking about all the things that had happened to me…all the times he had hurt me . . . how he had hurt the kids,” Francine told People. “I stood still for a moment, hesitating, and a voice urged me on. It whispered, ‘Do it! Do it! Do it!’”*

Francine put the children in the car. She poured gasoline around the bed. She lit the match.

Then she drove to the jail in Dansville, Michigan, to turn herself in.

It was a landmark case that established the concept of "burning bed syndrome." Francine was found not guilty by reason of temporary insanity. It also drew attention to domestic abuse in a time when men were still thought to "own" their wives, and as such, could punish them. Abuse was considered a family issue that should be handled in private. “'Do we break up a marriage simply because a man beats his wife?' asked New York City Councilman Leon A. Katz in a typical exchange with a group of advocates that testified in front of the city’s public safety committee in 1976."**

Domestic violence hasn't ended. It never will. But now we have shelters for women, and sometimes the police make arrests.

Now back to the movie. It's streaming on Prime Video so I watched it. It's excellent and still relevant. 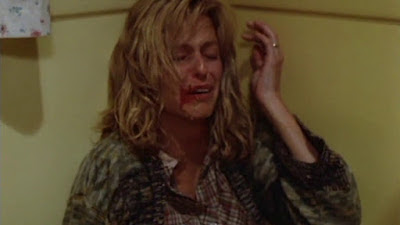 In her role as Francine Hughes, Farrah Fawcett was no longer a jiggly angel of Charlie's. Her performance is so good. Paul Le Mat is also fine as Mickey Hughes. Grace Zabriskie, with a whine in her voice, is Mickey's mother, who wants to cover up the abuse and blame it on Francine. Richard Masur plays Francine's lawyer.

The violence aimed at Francine is pretty graphic. At times it upset me––especially the final beating––but I recognize the need for it. Sometimes the only way to reach people is to shock them.

Unless you're Dr. Oz, who is beyond reach.

**ibid. I'm not sure why but this statement makes me think of Dr. Oz saying that abortion access should be left to women, doctors, and local political leaders––maybe because it's so stupid, or maybe because Leon A. Katz was so obviously unqualified to comment on abuse and had no problem with advocating that women should not have protection under the law.