DOCUMENTARY & SERIES WEEKEND: ABDUCTED IN PLAIN SIGHT AND A FRIEND OF THE FAMILY

Today we're talking about a documentary and a series based on the same events. Abducted In Plain Sight streams on Netflix (a.k.a. Forever B; 2017; Not Rated), while A Friend Of The Family is available on Peacock (2022; TV-MA; most episodes already streaming & the final episode available this Thursday). 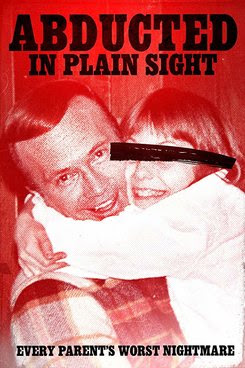 I watched this doc when it was new on Netflix. It will have you wondering if this story could possibly be true and when you learn it is, you might want to scream at the people on the TV. How could any adult be so stupid and naive?

Bob and MaryAnn Broberg and their three young daughters lived in Idaho, where they met some new friends at church–– Bob and Gail Berchtold and their youngsters. The two families became so close and Bob Berchtold in particular became such a fixture in the Brobergs' lives that he was nicknamed "B" because both men were named Bob.

A Broberg family member also ended up with a nickname. B paid particular attention to oldest daughter Jan Broberg and called her "Dolly." It wasn't anything unusual when B offered to take Jan horseback riding one day in 1974 when Jan was 12.

But he didn't bring Jan home.

B took Jan to Mexico, where he sexually assaulted her and married her, and his wife, Gail, blackmailed Bob and MaryAnn to keep them from calling the police. He even convinced Jan  that she had to have his baby before she turned 16 in order to save the alien race of another planet.

Eventually, the Brobergs called the police and got the FBI involved. B brought Jan home, but he kidnapped her AGAIN when she was 14 and enrolled her in a boarding school while he posed as a CIA agent.

It's nuts, isn't it? But it happened.

A Friend Of The Family is a dramatization of these events. The first episode begins with the real Jan Broberg, now well into adulthood and an actress, explaining that the documentary didn't tell her story as fully as she wished it had. It seems Bob and MaryAnn Broberg were widely condemned and harassed for their foolishness. 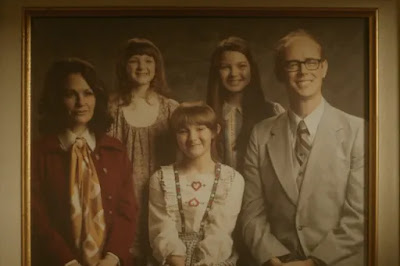 By watching the series, I do feel that I understand the Brobergs better. They were a very innocent, very religious family. They had never heard of such a thing as a pedophile. According to the series, the term was new to FBI agents, too.

I don't think my parents would have fallen for B's demands, but who knows what people will do? I was a victim of gaslighting that often had me questioning reality and doubting myself.

I think the series is pretty good. The cast includes Colin Hanks as Bob Broberg, Anna Paquin as MaryAnn, Jake Lacy as B, Hendrix Yancey as younger Jan, and Mckenna Grace as older Jan.

I hope I've given you the right amount of interest to pique your curiosity. Believe me: This story has a lot more to it than the information I've provided.