How's everybody? Been staying on Santa's Nice List, or are you eternally on the Naughty List and don't care?

On Sunday I dragged around some big branches and picked up sticks downed by Nicole, and I mowed, a pleasant task with the lower temperatures.

I bought a new lawn mower a few months ago. I used to have Clippy. Now I have Zippy. 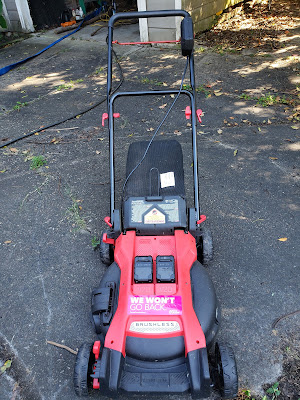 Zippy is a member of Planned Parenthood and wears her WE WON'T GO BACK sticker with pride. She also has plans of her own. As a battery operated mower,  she is quieter and smarter than her gas guzzling counterparts. Therefore, she intends to sneak up behind Mitch McConnell, Lindsey Graham, and quite a few other men so she can knock them down and mow right over them to remove their tiny excuses for penises and balls.
I hope she lets me watch.
I also had to grocery shop. When I was stopped at a red light, the man in the next lane spoke to me and gestured at my car. I thought something was wrong, but he  merely wanted to let me know he liked the bright blue of my car and wants to get his next truck in the same color. He told me of his intention so many times that I was grateful when my light turned green while his remained red.
I did some reading, too. I'm about 60 pages in on Like A Rolling Stone by Jann Wenner. I've read enough to state with confidence that Wenner is a man in love with himself and with rock music––in that order.
Then there's The Crown. Season Five showed up on Netflix last week. I didn't watch anything else until I'd seen it because I've found the previous seasons delightful and dishy. I finished the tenth and final episode last night and was not impressed, which I attribute to miscasting––with a couple of exceptions. 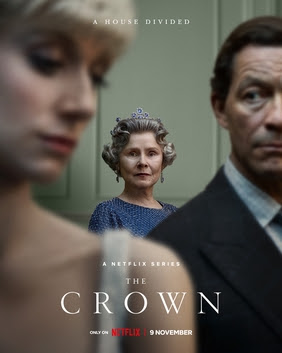 The cast for The Crown changes every two seasons. The current crop doesn't cut it. They're so lacking in warmth that I feel little interest in them.

Imelda Staunton as Queen Elizabeth only comes to life in a couple of sequences with young Prince William (Senan West), who helps her with her TV because an aging grannie doesn't want to give up her old set, and when she does, she can't figure out how to use the new one because all old people are stupid and technologically challenged. I'm old and obviously can't cope with my laptop or my smart devices, which is why the paragraph above about Zippy is all in caps and a different color. I can't change it no matter how many times I retype it and make adjustments.
Emma Corrin originated the role of Diana during season four. She brought a lovely charm and innocence to the role. That sweetness is gone with Elizabeth Debicki in the part. She does the head down with eyes looking up thing, but other than that, she's not Princess Diana-ish at all. Diana was tall––5' 10"––but Debicki at  6' 3" towers over the other actors, giraffe like. She certainly doesn't do the "revenge dress" justice. She makes Prince Charles (Dominic West) and Camilla Parker-Bowles (Olivia Williams) look good in spite of the whole "I want to be your tampax" thing.
I found some bright spots, though. I enjoyed Prince Philip's (Jonathan Pryce) story about taking up carriage driving when he has to give up polo, and the lovely friendship he develops with Penelope Knatchbull, a relative whose young daughter has died.
Princess Margaret also has a good plot line as she reconnects with the great love of her youth, Peter Townsend. Lesley Manville is fine, although without the acid of the great Helena Bonham Carter, who made an outstanding Margaret.
The Crown will have a sixth season. It's supposed to be the last. It will be a lengthy wait for that final season. It's best that the show winds down. It's losing its power.
As for the controversy over did such-and-such reeeeeeeally happen, I don't care. If you watch a movie or series based on real events and real people and you think everything in it is accurate and happened exactly the way it's depicted, then you're a silly sap. Get over it, John Major and everyone else who's bitching about it. The show is similar to a roman a clef, but without fictionalized names for the characters.
So, there you go. That's what I've been up to. I hope your week has gotten off to a good start.
Infinities of love,
Janie Junebug
Posted by Janie Junebug at Tuesday, November 15, 2022