RACHEL'S TOUGH TOPICS: SERVERS CAN LOSE MONEY AT THEIR JOBS 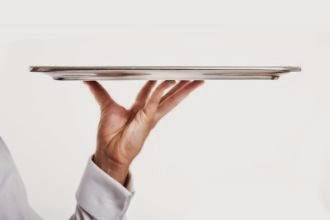 Rachel of When A Lion Sleeps, Let It Sleep has started a "Tough Topics" series on Mondays. I asked if she, as a long-time server,  would please write a post for us about what servers experience with their pay--and I lose the term "pay" loosely. I don't know how anyone can read this post and insist that servers don't deserve to earn a living wage. 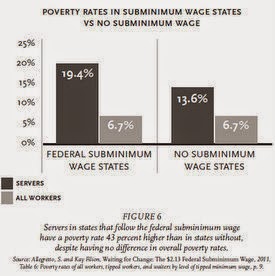 
Hey everyone. It's Rachel, Janie's bloggy daughter, from When A Lion Sleeps, Let It Sleep.

I worked in a family-owned Italian restaurant for just over a year, about half of which was spent as a server. When I moved to Arizona, I worked in a big, corporate steakhouse with asshole managers for five months until I quit, because said asshole managers were in fact, assholes. (Also, I got a promotion at my other job, so I didn't need to keep the server job.) I'm sure that you've guessed what the subject of my guest post is.

Servers in America live on tips.

Most servers don't even get paychecks anymore, because the government assumes that each server makes at least 15% in tips every single shift, so the government collects taxes on that assumed 15%. The percentage is based on sales. If a server sells $100, then the government is going to assume that they made $15, so they will collect taxes on that $15 that the server may not have even made.

Let's use a 10% tax because from what I saw online, that's fairly average. That comes up to $1.50. So, regardless of what the tip was, you would already owe the government $1.50. That's not very much, when you think about it, but that's not all.

All of taxes collected come out of the server's paycheck. In nearly every city of nearly every state, servers make between $2.13 to $3.00 per hour. Taxes vary from state to state, so we'll just stick with my example, but keep in mind that when you add in state tax as well as the regular tax,  you can owe even more money. With all of the taxes being taken out and the paychecks being next to nothing to begin with, most servers don't even get a paycheck. None of the servers I know ever gets a paycheck for more than $15. Usually, it's closer to $5 or less.

Then, to top it all off, the server also owes other restaurant employees a percentage of the money. It's called "tip out." It's different in every restaurant, but in the Italian one I worked in, it was 2.5% of the total sales and the steakhouse was 1.75% of the total sales. The tip out is split between the hostesses, the food runners, the bussers, and the bartenders. There might be more people on that list depending on the restaurant also. Whether or not the server makes the amount, they still have to tip out. In some restaurants, I've been told that the tip out is up to 50% of the tips earned. Let's stick with the 2.5% of the total sales because that's the example I'm using, from my own personal experience.

The customary tip in America is to leave at least 20% for good service. So minus the tax it would be $18.50 and then minus the tip out, the server would then walk with the $16 remaining. That's pretty decent to leave with.

But the problem is, a lot of people are assholes, so let me tell you the story where all this math becomes relevant.

It was a Friday night, so the restaurant was slammed. I wanted to turn tables, because the more tables you can have in your section, the more money that you can make. I was only given a four table section, but two of the tables were not ideal so it was very hard to get people to sit there. A table of two was in my section at table 93. It was an older man in a wheelchair and his grandson, who was a little older than me.

I introduced myself and told them about our specials. They were new to the restaurant so I offered them some suggestions. They each got their own appetizer and a glass of wine. It came out as quickly as possible on a busy Friday night. I ran everything out to them myself, because I knew how busy the food runners were. My other good table, booth number 102, was a party of four, whom I greeted and got drinks for. They had a lot of questions for me, but table 92 kept calling me over just to chat.

In order to get to the booth, I had to walk by the table, but I couldn't do so without them stopping me for something. They never needed anything, though, which meant that I was wasting time when I could be helping the booth of people who actually did need my services.

Table 92 ordered two entrees and two more glasses of wine. There were special instructions involved, which meant that it took me twice as long to ring in, because I had to make sure that it all went onto the computer correctly. Even so, they had their meals within fifteen minutes. I was finally able to get over to table 102, to give them much-needed refills and get their full order. They were annoyed, understandably, but very nice about it.

Everyone got their food and was eating, all six people. I was very happy. It gave me time to help out the other servers who had a more ideal section, so were much busier with larger parties.

Table 92 called me over. The old man wanted the bill, which I handed to him right away, and asked me to wheel him to the bathroom. He must have weighed well over 100 pounds more than me, but I got him to the bathroom and he went inside alone, because I am not that nice. The bill stayed on the table for ten minutes before he came back. I was fine with it, because their bill had come up to $99.61. They had been there for about two hours at that point, but I was hoping for the 20% tip because that would roughly even out to making $10 per hour that they were there.

The old man came back, handed me a hundred dollar bill, and I went to the back to close out the check. I wasn't gone more than two minutes, but when I got back, they were gone. I was hoping that they left some extra cash on the table, since I saw quite a bit in his wallet when he opened it to give me the $100. I didn't find it. I called the bus boy over. We tore the table apart but we never found anything. My tip after two hours of constant service was 39 cents. 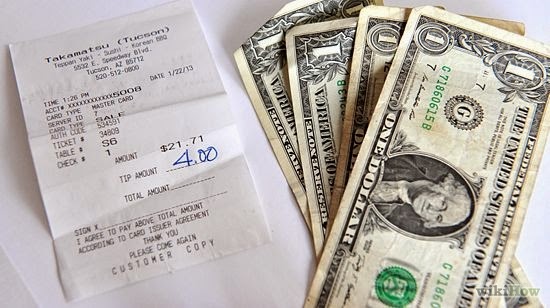 But no, I didn't even get to keep it, because I owed $2.50 in tip out alone, plus taxes. I literally paid about $4 to work. I didn't get paid. I paid money to do the job that I was supposed to be paid for. Can you name one other job that has to do that?

Not only did I have to pay to serve them, but I could have seated at least two other tables where they were sitting, if they had not sat there for so long. Then to top it all off, my service suffered at booth 102 because they were so needy-chatty. I lost more than just $4 because of all of that. On a Friday night, I walked with a minimum of $70 every week, but that night I walked with about $30. 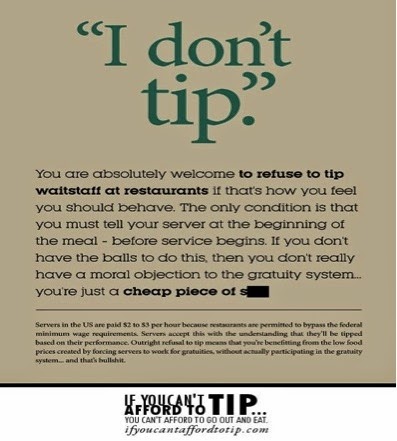 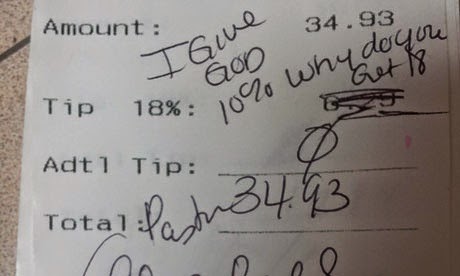 Thank you, Rachel, for explaining this injustice to us. Maybe some readers will leave larger tips as a result of Rachel's post. And if you can't afford the tip, then don't eat out.