Before we chit-chat about movies, I urge you to visit Cherdo on the Flipside. This link will take you to her post from Wednesday (yesterday, for those of you who haven't mastered the days of the week). I am cartoonified in this post, along with Shady Del Knight of Shady Dell Music & Memories. We join Cherdo herself. Cherdo is a scream, meaning I scream with laughter when I visit her blog. When you visit Cherdo (not if--when), please be sure to tell her I sent you.

Now, my dears, I have two documentaries for you today. I think they are quite interesting. 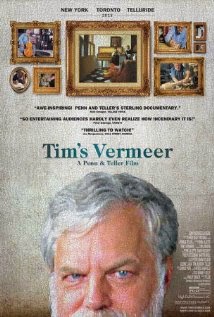 I don't think I've ever seen a Vermeer in person. The Hurricane saw Girl With The Pearl Earring. I asked her how she felt when she saw it. She said it was nice, but she didn't feel all that excited about it. I know she gets excited over some other artists, though. When we saw a Frida Kahlo, we sat and stared at it for a long time, studying every detail.

As for Tim's Vermeer, Tim is Tim Jenison, one of the founders of New Tek, Inc., which invents all sorts of imaging software for personal computers. Tim has a boatload of money, so he can pursue his interests, one of which was to figure out how Dutch painter Johannes Vermeer created such beautiful, yet realistic looking paintings. Tim felt Vermeer's paintings looked as if they almost could be photos.

In this documentary, directed by Teller (the one who doesn't talk), and narrated by Penn Jillette, who wrote the movie with Teller, they follow Tim as he embarks on his quest to understand Vermeer's technique. Tim then spends an entire year "painting" Vermeer's The Music Lesson. Or not. It isn't Vermeer. It's Tim's copy. Although Tim wants to understand Vermeer, I don't see any enthusiasm for Vermeer's work. It's kind of like climbing a mountain because it's there. Tim wants to paint a Vermeer because it has to do with optics and he's in the imaging business.

Although I enjoy the movie, perhaps it should be titled Tim's Not A Vermeer. I doubt if most children will find the documentary interesting. Perhaps you can get your teens to sit down and watch with you. They might learn something about the camera obscura and the difference between a painting and a reproduction. Tim's Vermeer earns The Janie Junebug Seal of Highest Approval in spite of Tim's failings. They didn't keep me from being glued to the movie.

Next up we have a rather strange documentary titled Finding Vivian Maier (2013, Not Rated, Available On DVD). 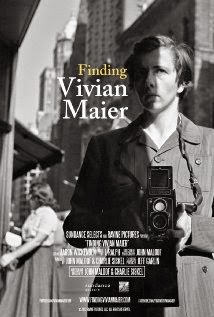 Realtor John Maloof seeks photos for a book about his neighborhood. He buys a number of photos at an auction. They aren't suitable for his purposes, so he sets them aside. But he's drawn to further study of the work, which he recognizes as photographic masterpieces. He finds more photographs by the same person, and learns she is the late Vivian Maier, a woman who spent many years working as a nanny while she honed her craft as a street photographer.

The documentary is about both Maloof's discovery of the photos and realizing how great they are, and the strange life of Vivian Maier.  Information about her life is scarce. Directors and writers John Maloof and Charlie Siskel do their utmost to put together a history of Maier's life. It's not easy. Much of the information about her comes from the children for whom she "cared."

Maier's images are arresting, but I began to feel that Maier should have been arrested. Although her skills as a nanny seem to have been fine when she started her career, they deteriorated into abuse. Employers had problems with her hoarding.

Maier also hoarded her photos––more than 100,000. Why weren't they displayed while she was alive? Why were so many of them never developed? Was it a lack of funds? Did she want to shoot the photos, but didn't care what they looked like after they were developed?

Maier died in 2009. Some of her prints are for sale, and exhibits of her work are organized. She's thought to be a master photographer. I'm just glad Miss Maier wasn't my nanny. Not that I ever had a nanny. I raised myself just a few years ago.

I can't imagine this film would be interesting to children, and if they heard some of the stories about Maier, you could never again leave your children with a babysitter. They'd be too frightened. I don't know if teens would be interested, but this kind of documentary provides some art education, which most students don't receive in school. Perhaps you can bribe them with popcorn and letting them sleep late in the morning.