I am grateful to Netflix for telling me I would like this movie. I am so moved by it that I want to lie outside in a completely dark place to marvel at the stars. But then the mosquitoes would bite me and a palmetto bug would creep into my hair, so I am satisfied by the thought of Infinity (1996, PG, Available On DVD). 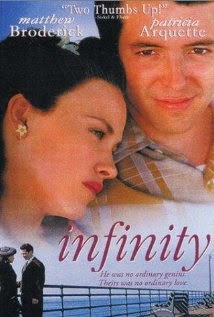 Infinity makes me a little sad because the story c'est tragique and because it came out in 1996, but I didn't know about it until a few weeks ago.

Not many physicists are well known. Fewer physicists publish books that are a popular success. Richard Feynman (Matthew Broderick) was such a physicist. Infinity tells the story of his education and work on The Manhattan Project in Los Alamos, New Mexico, but to a greater degree, it is the story of the great love between Feynman and his wife Arline (Patricia Arquette), who is diagnosed with tuberculosis.

Broderick and Arquette portray the beautifully romantic love between the couple to the nth degree. Critics often accuse Broderick of never playing anything but himself, or Ferris Bueller. If Broderick is himself in this movie, then he needs to change his name to Richard Feynman. This is his finest performance. Arquette is lovely, and such a good actress. I'm not very familiar with her work, but I love her now.

Furthermore, Infinity is Broderick's directorial debut, and his mother, Patricia Broderick, wrote the screenplay. What a collaboration between a mother and son.

Congratulations to the cinematographer, as well, who captured many beautiful shots, some by accident, according to Matthew Broderick and Patricia Broderick

It's well worth your time to listen to the Brodericks' commentary on the DVD. It includes many interesting anecdotes, and I always enjoy learning about the technical aspects of filming.

I'll share one of their stories: When they tested the movie before an audience, one of the oft-repeated comments was that Broderick didn't sound as if he's from New York. The audience thought Arquette's New York accent was spot on.

Of course, Broderick is from New York, and Arquette is from Los Angeles. Arquette worked with a coach to capture her accent.

Richard Feynman: Mathematics is a language. It's very difficult. It's subtle. You couldn't say those things any other way - and I can talk to dead people with it. I talk to Copernicus every day.

Infinity earns The Janie Junebug Seal of Highest Approval. It also has a historical connection with the book I'll review tomorrow (Friday) for The Cephalopod Coffeehouse.

I doubt if young children would like this movie. It might be a good way to introduce teens to physics and The Manhattan Project.

P.S. Warning: This movie does not have subtitles and it skips around in time a bit. One must watch carefully to follow the plot. For that reason, Willy Dunne Wooters did not watch it with me. Without subtitles, he has no hope of understanding people with Bronx accents.