October tends to be a good month for the Junebug household.

During October, the heat of the summer leaves us. This year, it cooled off especially early––during the last days of September.  Our highs have been in the 70s. We don't need the air conditioning, which saves a lot of money.

No doubt we'll have some warmer days before the month ends, but it will turn nice again. Franklin and I have already enjoyed some walks to the neighborhood park.

October is also a month of happy anniversaries because Franklin and Penelope came to live with me during October.  Franklin has been here for 10 years. Penelope has put in five years of rigorous work, trying to reform us all.

Franklin is about 12 years old. Penelope is six or seven. 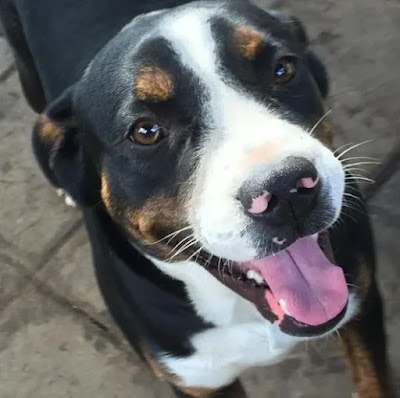 This photo of Penelope is the one that had me headed to Claxton, Georgia, to adopt her from a rescuer. How could I resist that sweet face?

Penelope was born under a house. A woman who has an all-volunteer rescue organization had taken in Penelope, her siblings, and their mom.

Claxton does not have a humane society. The woman had about 100 rescued dogs in kennels in her yard. God bless her. 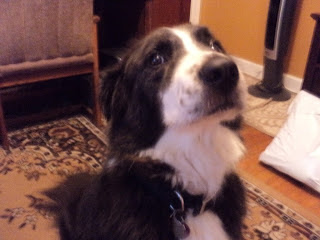 This shot of Franklin is one of my favorites. He sits so proudly, always happy to be the good boy. And he gazes at me with such love.

I look forward to the vice-presidential debate on Wednesday. I suspect Mike Pence and Kamala Harris will be better behaved than Donald Trump and Joe Biden.

As a former debater I can tell you that if we had interrupted our opponents, lied, told an opponent to shut up, engaged in racist antics, made a personal attack on someone's family––any of those behaviors would have led to forfeiting the debate and getting kicked off the team by the debate coach.

What happened last Tuesday night was not a true debate.

One more point for today: WEAR YOUR DAMN MASKS. AND NO, LETTING YOUR NOSE HANG OUT IS NOT OKAY.

Certain people who don't wear masks, who lie to the public about masks, who go out of their way to put other people's lives at risk, are sick now. I have no sympathy for them.