TIP TUESDAY: WHO IS YOUR FIRST COUSIN, ONCE REMOVED?

I have some info I hope you'll find useful about the terms used for relatives, and no, they don't all consist of four letters.

I have a first cousin named Kathy, who has beautiful red hair. I know that Kathy is my first cousin because my late Aunt Evelyn (a.k.a. Evilena) was Kathy's mother. Aunt Evelyn was my mother's older sister.

My first cousin Kathy gave birth to a passel of daughters, who also have red hair.

Now the big question is How am I related to my red-haired first cousin's red-haired daughters?

It has come to Your Queen's attention that many people think that those red-haired daughters are my second cousins. Not true, dear ones.

They are my first cousins, once removed.

How do I know? I read it in a magazine, the same way I learned about Bennie's electric boots and her mohair suit.

Today if I want to know the term for something, I Google it. But in 1994, we weren't Googling. I really did learn these terms from a little piece in a magazine that I cut out and have kept to this day because I used to get so tired of The Hurricane asking me over and over about how we were related to people so I would tell her to get out the little piece from the magazine so she could see for herself.

Oh, my goodness. I'm out of breath after that sentence.

The Hurricane no longer asks me a damn thing, but I kept the magazine clipping, which lives in a little drawer on the shelves with my office supplies.

I have a nephew named Joe, who is Favorite Young Man's and The Hurricane's first cousin, still named Joe. Joe has three children, who do not have red hair; however, they are FYM's and The Whirly-Twirly girl's first cousins, once removed.

Are we strong on our first cousin, once removed information now? I hope so because I'm not telling you again. So there!

Remember how teachers would say "there's no such thing as a stupid question," and then they'd yell at someone who asked a question? Ah, those happy memories of school days.

Next week, I hope, we'll move on to more terms for relatives, and you still won't get me to apply nasty words to them––no matter how tempting it might be. 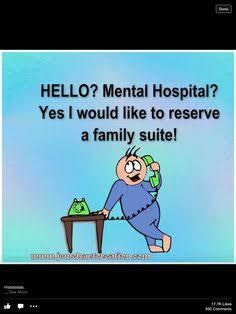