Maudie came out back in 2016. You haven't heard about it from me before because I didn't hear about it until recently. The fine folks at Netflix delivered the DVD to me. It's rated PG-13. 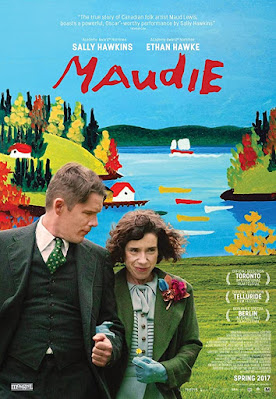 Maudie is based on the true story of Maud Lewis (Sally Hawkins), who lived in rural Nova Scotia with her grumpy, old s.o.b. husband Everett (Ethan Hawk).

The Lewises didn't have electricity or running water. Their cottage was small and unattractive––until Maud started painting cheerful flowers and animals on it and ended up becoming a Canadian folk artist whose work is now on permanent display at the Art Gallery of Nova Scotia, along with their restored cottage.

One of her big problems, and the reason she ended up with Everett Lewis, is that Maud didn't have anyplace else to go. I suspect she's not the only woman who has dealt with a difficult life with creativity.

Now that I know about her artistry, I'd love to see her paintings in the museum. I've long wanted to visit Nova Scotia. 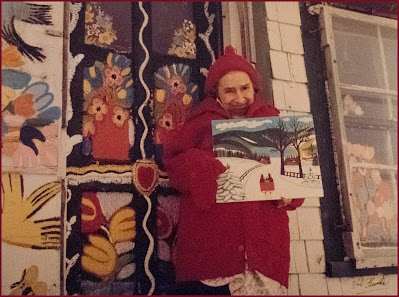 Here's the real Maud with one of her paintings in front of the cottage that she decorated so beautifully. Maud Lewis died in 1970.

I like folk art and would love to add a Maud Lewis painting to my home. These cows are adorable: 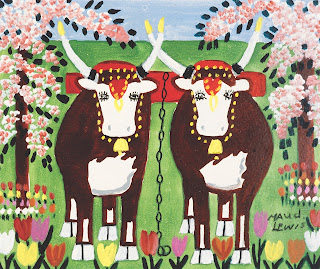 Whether you find Maudie and watch it or come up with some other movie you'd like to see, I wish you happy viewing!