I thought Joy was a straight up biopic about entrepreneur Joy Mangano. It's true that the original script was about Mangano. Director David O. Russell became involved with the project and re-wrote the script so that it's loosely based on Mangano's life, but more important, he made Joy a paean to strong women (2015, PG-13, Available On DVD). 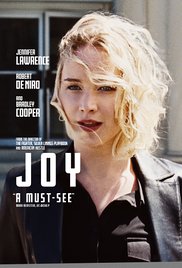 Joy (Jennifer Lawrence) has the weight of the world on her shoulders. She works as an airline reservations clerk; she has two children with her ex-husband Tony (Edgar Ramírez), who lives in her basement; she takes care of her mother Terry (Virginia Madsen), who had a breakdown when she and Joy's farther divorced so she stays in bed all day watching soap operas; she does the books for her father Rudy's (Robert De Niro) poorly run business, and Rudy's most recent love interest dumps him so he moves into Joy's basement with Tony; and she contends with her nasty step-sister Peggy (Elisabeth Rohm), who always has something unkind to say to or about Joy, especially to Joy's children.

The one person who encourages Joy is her grandmother Mimi (Diane Ladd), who also narrates the movie. However, her advice to Joy was to get an education, get a job, get married, and have children. Mimi doesn't quite see how talented Joy is.

Joy is filled with ideas for inventions, such as a self-wringing mop, and she has the smarts to design and create her inventions. When she starts her own business, how can she become a success when so many people in her life bring her down?

The main thing Joy has going for it is Jennifer Lawrence's performance. She was nominated for the Academy Award for Best Actress for this film. Did she deserve that nomination? That I can't answer, but in spite of Joy allowing so many people to take advantage of her, she comes to epitomize the strong woman who carries on no matter what. In that sense, the performance is good.

Other members of the cast, especially Robert De Niro––who has become a caricature of himself––do not live up to Lawrence's performance.

I like the movie because of Lawrence and her character's experiences. I love people who are persistent for the right reasons, so I like the plot. The screenplay could be better; it might have made the other performances stronger. At times, Joy comes off as a fantasy. Which parts of it are true? I'll try to tell you about Joy Mangano tomorrow.

Joy earns The Janie Junebug Seal of Pretty High Approval. I doubt if it would interest your kids, but you might invite your teenage daughters to watch it with you. I would want to talk about the good and bad points of Joy's character. I'd also warn young women not to go out on their own, as Joy does, to confront shady people engaged in bad business practices.

If you feel any interest in Joy, then I say, give it a chance. Happy viewing!