WHO IS JOY MANGANO AND WHY DOES SHE WRING OUT MOPS ON TV?

I can answer my own question: Joy Mangano is the inventor of the Miracle Mop along with dozens of other products. She wrings out mops on TV because it has made her a millionaire.

On Thursday I wrote a review of the movie Joy and promised I would return to tell you about the real Joy, so here I am.

I warn you that if you have not yet seen the movie Joy and intend to do so, then you will find spoilers in this post.

Let's begin by watching Joy and her Miracle Mop in a 1996 infomercial:

The Miracle Mop was Joy's first big seller on television, but when you watch the movie Joy, you'll discover that her last name is never uttered, and Joy, portrayed by Jennifer Lawrence, spends only a couple of minutes demonstrating her mop on TV. Joy Mangano and director David O. Russell state that about fifty percent of the movie tells the story of the real Joy.

So how is Joy like Joy, and how is it different?

Joy was a struggling single mom, who had dozens of ideas. When she finally learned how to build and patent them, she was off and running.

She was the caretaker in her family who was strongly influenced by her grandmother, a waitress.

Joy made the prototype for the mop in her father's garage (a business, not simply a garage for a car).

The Miracle Mop did not sell well at first. Joy insisted on demonstrating it herself on QVC, which was about to drop the product.

Joy's best friend is named Ronnie, not Jackie, but she really called in during Joy's first appearance on QVC (without revealing she was Joy's friend) to help her sell the Miracle Mop.

Joy sold 18,000 mops during her first hour-long pitch on TV, although some sources state the mops sold in 20 minutes, and others say 30 minutes.

At the end of the movie, Joy leaves QVC in 1999 for HSN when they bought her company, Ingenious Designs LLC. One of her inventions, Huggable Hangers, is HSN's biggest selling item.

Joy has two children in the movie. She actually has three.

The invented QVC executive played by Bradley Cooper asks Joy to have 50,000 mops ready in one week. The number was 1,000.

To create her product, she received some financing from her father and (maybe) some of his wealthy girlfriends, used her own life savings, and took out a second mortgage on her house, but she also asked friends and other family members for money.

Her ex-husband is not a Venezuelan failed singer. He was her classmate at Pace University (she did not give up attending college to help her parents through their divorce). Joy hired him to work for her company because he's a good businessman and because she wanted him to spend more time with their children, who are now adults. Two of them work for the company, too. The third has her own Web site and is a model.

Joy's mom, Terry, is a composite of characters. The soap opera she watches is not a real show.


About the time the movie Joy was released (Christmas, 2015), Joy re-imagined the Miracle Mop and sells it for the same price as the original: $20. She holds at least 100 patents.

Joy is not a struggling single mom anymore. She remains unmarried, but very close to her children. She owns at least two mansions––one in New York and one in Florida when HSN has its headquarters.

Joy, second from left, with her three children: 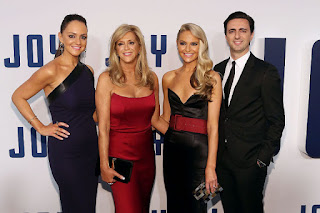