I love the play I watched on PBS tonight: Act One, based on the memoir of playwright Moss Hart (please disregard the 1963 film of the same name that stars George Hamilton).

Without Googling his name, how many of you know who Moss Hart was?

Do you know any plays or screenplays he wrote?

I haven't yet found DVDs of Act One or streaming services that carry it, but it seems the entire play is available on this PBS site: http://www.pbs.org/arts/pbs-arts-festival/2015/act-one/

The production is well done, and the acting is superb. Oi! Such a set! I recommend Act One to you, especially if you have an interest in writing and enjoy the theater.

I've wondered about Moss Hart for years. When I was quite young--twelve? thirteen?--my father mentioned that when he was a pilot during World War II,  Moss Hart took my dad and some of his colleagues out for a beer because he wanted to interview them.

I did a little research on Moss Hart and found him to be quite interesting, and not as suave and educated as his public face.

Here's Moss Hart with his wife, Kitty Carlisle, and their children, Christopher and Catherine. 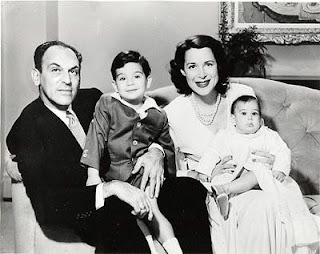 Now here's another question: How many of you can tell me who Kitty Carlisle was without, of course, Googling her name?

Carlisle outlived Hart by many years.

But I wish I had a recording of that interview with the pilots.