If it's even close to as hot and humid where you are as it is where I am, then consider binge watching some series on Netflix Streaming during the long Fourth of July weekend or your summer staycation. Three of them earn The Janie Junebug Seal of Most Super Highest Approval, but they're for adults only.

I want to warn you now, don't think that you can watch any of these shows by starting with the most recent season. You must watch from the beginning or they won't make sense.

First, from Halifix in England, we have Happy Valley, a gripping and intense police drama. Two seasons are available on Netflix. 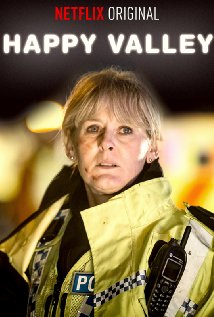 Happy Valley is an ironic name for the area in Yorkshire where Police Sergeant Catherine Cawood (Sarah Lancashire) solves crimes and kicks criminals' arses. She also has to deal with plenty of personal drama.

All of the actors in this show are great, but I reserve a special commendation for Lancashire.

Second, from the Florida Keys, we have Bloodline, which also involves criminals and mysteries and family drama. Two seasons are available. 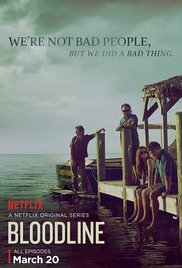 The black sheep of the Rayburn family, Danny (Ben Mendelsohn, the breakout star of the show), returns to the Rayburn's posh inn in the Keys after a long absence and brings memories of childhood tragedy with him along with drugs and threats.

One member of the family who stands in Danny's way is his brother John (Kyle Chandler), who happens to be a detective in the sheriff's department. John and his siblings are not opposed to taking any means necessary to protect their family and their inheritance from Danny's machinations.

Third, from fictional Litchfield Prison in the U.S., we have Orange Is The New Black. The show's fourth season was released recently. 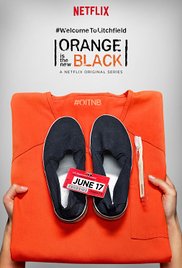 When OITNB began, I thought it would focus on Piper Chapman (Taylor Schilling) alone, and it does for a while (she's never completely out of the picture). Chapman is sentenced to fifteen months in prison because ten years ago, she delivered drug money to her dealer girlfriend, Alex Vause (Laura Prepon).

Chapman may be a graduate of Smith, but she's not always so bright in the hierarchical world of Litchfield. She begins her stint in prison without food because she insults the culinary skills of Red (Kate Mulgrew), the Russian prisoner who runs the kitchen. But Piper figures out a way to gain Red's forgiveness, which might not last very long with Red's hair-trigger temper.

After the initial plot point about Piper and Red, the show shifts to include backstories and prison stories for other inmates and some of the guards. The entire cast is outstanding. It's difficult to stop watching, so don't say I didn't warn you when you think I know it's two in the morning, but I'll quit after one more episode.

I've loved Orange/Black since the first episode, but Season Four is the best so far. Litchfield is now an overcrowded for-profit prison. A certain Little Miss Nosy Britches manages to ignite a race war, fueled by the new guards, who make the prison a war zone. The penultimate episode, in my heart, recalls the tragedy of Lady Sybil's death on Downton Abbey. The season finale is so taut with anger and the prospect of violence that I don't know how I'll wait until 2017 for season five.

OITNB has been renewed through season seven. Praise God!

A special aspect of the fourth season includes a perfect song for each episode to play with the closing credits. I'll treat you to my favorite after we deal with all that la la infinities of love.


This is Folk Uke, which consists of Cathy Guthrie and Amy Nelson. Here, they're joined by their famous fathers, Arlo and Willie.