THE STORY BEHIND MARIA ALTMANN'S QUEST TO REGAIN WOMAN IN GOLD

Yesterday I reviewed the movie Woman In Gold, which stars Helen Mirren. I promised more information about Maria Altmann's fight to have her Nazi-plundered artwork returned by the Austrian government, so here it is.

SPOILER ALERT: If you haven't seen the movie yet and don't want to know the complete story, then stop reading NOW.

Let's begin with a photo of the late Mrs. Altmann with a prized possession, a portrait of her aunt, Adele Bloch-Bauer, by famous Austrian painter Gustav Klimt: 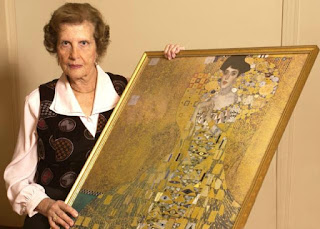 Now you know that the movie ends with Mrs. Altmann getting her family's paintings back from Austria, whose government argued that they should be allowed to keep the artwork stolen by the Nazis.

Maria Altmann grew up in Austria as Maria Bloch. Her aunt was Adele Bloch-Bauer, who modeled for some of Gustav Klimt's most famous paintings. Adele Bloch-Bauer died in 1925 when she was forty-four.

Maria married Fredrick "Fritz" Altmann in 1937. In 1938, the Nazis annexed Austria. They sent Fritz to the Dachau concentration camp as a means of extorting his brother, who had already left for England, to hand over his successful textile factory to the Nazis. He did so, and Fritz was released. The couple escaped from Austria and settled in Los Angeles.

Before Adele died, she asked her husband to leave their valuable paintings by Klimt to the Austrian National Gallery. Ferdinand Bloch-Bauer died in 1945 and left his estate to his nephew and two nieces, one of whom was Maria Altmann.

Adele's request became an important point in the Austrian Government's argument that they should keep the five stolen Klimts in their possession. However, Adele made her request many years before the Nazi takeover of Austria, and in fact, the paintings belonged to Ferdinand.

During the 1990s, the Austrian Green Party helped pass a law that paved the way for greater transparency regarding the country's Nazi past. A crusading journalist named Hubertus Czernin learned that Ferdinand did not leave the paintings to the National Gallery.

Armed with this information, Maria Altmann tried to negotiate with Austria for the return of the Klimt landscapes owned by the family. She said they could keep the two portraits of Adele. The Austrian Government refused, and a large filing fee made it impossible for Maria to sue the government.

In 2000, Altmann filed suit in the U.S. Her lawyer, Randol "Randy" Schoenberg, argued the case before the United States Supreme Court. Their decision was that Altmann could sue Austria. However, because such a suit could take years,  Schoenberg suggested that they submit the case for binding arbitration.

In 2006, a panel of three Austrian judges decided that the paintings had to be returned to Ferdinand's heirs. It became the largest return of Nazi-stolen artwork, as the paintings were estimated to be worth $150 million.

First, the paintings were displayed in Los Angeles. Then they went on the auction block at Christie's. Ronald Lauder, son of the late cosmetics magnate Estée Lauder, purchased Portrait of Adele Bloch-Bauer I (known as Woman In Gold) for $135 million, at that time the largest amount ever paid for a painting.

Since then, it has been on display at Lauder's Neue Galerie in New York.

The other four Klimt paintings sold for a total of $192.7 million. The proceeds were divided between several heirs. Maria and Fritz Altmann had four children and a number of nieces and nephews.

Altmann told the New York Times: “You know, in Austria they asked, ‘Would you loan them to us again?’ And I said: ‘We loaned them for 68 years. Enough loans.’ ”

Maria Altmann died at age 94 in 2011. She could rest safely with the knowledge that her Aunt Adele was in the hands of an art lover in New York, for Lauder has pledged to keep the painting on display there.

An ABC News report on the recovery of the paintings:

And here is Adele Bloch-Bauer, as she looked in about 1910: 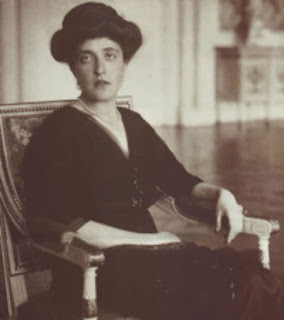 Does the movie Woman In Gold include every detail about the recovery of the paintings, and do so with complete accuracy? Of course not.

It does, however, capture Maria Altmann's tenacity in going after the paintings, which for years she believed belonged to the Austrian National Gallery. A plaque next to the painting said it had been donated by her aunt and uncle.

When she learned the truth, she went after what was rightfully hers and also drew attention to the way the Nazis stole art from the Jewish people. She told one newspaper that Austria prolonged the case as long as they could because they hoped she would die. She refused to do so, she said.

The movie is quite good at portraying the intricacies involved in the case against Austria and the inventiveness of her lawyer, who discovered the method for bringing suit in the U.S., although he had never before been involved in such a case.

In addition to Woman In Gold, you can find a number of documentaries about the case, and you can see Maria Altmann's interview with the Shoah Foundation here: https://goo.gl/2qzpfo