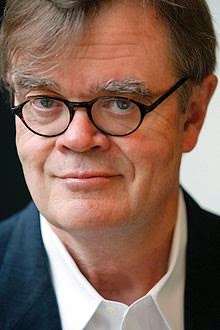 A happy memory from Favorite Young Man's and The Hurricane's youth is that we listened to A Prairie Home Companion on Saturday evenings while we ate supper.

Then last night, the night before the show, I became ill (bad, bad tummy), and I haven't recovered completely. But I love G.K. and I spent $120 on those two tickets, and I wasn't letting a case of the shits diarrhea keep me from the man. It would be like flushing the 120 down the toilet with the you-know-what.

I managed to drink a little diet coke, and at 5 p.m. I ate some toast. It didn't cause much agony, so I decided to go, albeit with toilet paper stuffed up my arse in case of wet gas.

Garrison Keillor was not doing his radio show. He came out and sang and talked and told stories and jokes. The evening ended with a singalong. Many of the stories he told could be part of a Lake Wobegone newscast, but he didn't do The News From Lake Wobegone.

He started by singing a great song about dying someday and if he learns there's no God he will be pissed he wasn't an atheist.

He told a couple of jokes about Ole and Lena, whose names might as well be Lyle and Lois Goltz.

Ole is on his deathbed. He asks if Lena is here. Yes, of course. Is Sven here? Yes, everyone is here. Ole goes through some more names, asking if those people are here. The group assures him, We are all here. Ole says, Then why are the lights on in the living room?

If you don't get that, then I think you are too young, or you don't understand the kind of humor we Midwesterners tend to share.

Lena baked a rhubarb pie. Ole could smell it, and he wanted one last taste of rhubarb pie. So he crawls to the kitchen and gets out a knife and crawls to the pie. Lena comes up behind him and smacks him on the head and says, Leave that alone. It's for the funeral.

Oh, how I laughed. So did Favorite Young Man.

G.K. also said that no matter how bad things are, Midwesterners will always say, Well, it could be worse.

The show reached its charming conclusion. FYM and I headed out into the rain to walk to the car. FYM commented on how cold it was. Yah, I said, but it could be worse.

Then it occurred to me that I had done exactly what G.K. said I would do, so we laughed some more.

I told FYM I had such a great time that I might be in a good mood for ten or fifteen minutes.

Oh, but something happened that made me crazy. FYM dropped me off at the theater and went to park the car. I went in the building and turned to the right to get the tickets. When FYM came in he said that right after I got out of the car that Garrison Keillor walked by the car and went in the door to the theater. He was to the left of the car. I was to the right. I did not see him. Why does it matter? I saw him onstage. But it's fun to see celebrities get out of cars and act like regular people who stroll through the lobby.

I said to FYM, I love you unconditionally, but right now I am really fucking pissed off that you got to see Garrison Keillor walk into the building and I didn't. Really. Really pissed. BUT I LOVE YOU UNCONDITIONALLY.

I'm also upset because I wore the pink cashmere gloves I got for Christmas and I moved the garbage cans from their spot at the curb where the garbage men empty them back to their usual home in the backyard. When we got to the theater, I noticed that the palms and fingers of the gloves had turned black. Oi! Was I upset! I don't think I can get the black off. That's what happens when you look forward to Garrison Keillor and you hope you don't have diarrhea that ruins the whole thing and you're such a good citizen that you don't leave your garbage cans out at the curb.

And yes, I've already looked online, and I can't find the exact same gloves that have a matching pink hat.

II forgot to say that yes, he wore red tennis shoes. I wish my dad could have been there. He loved Garrison Keillor. We're just a family of Keillor lovers.