Salutations! Glad you drug yourself over to read a movie review.

Whiplash is a WOW movie (2014, Rated R, I watched it on a DVD from Netflix [I have a subscription]). 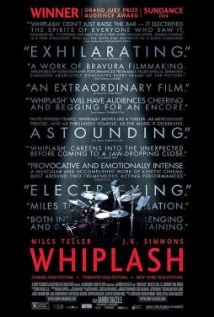 Are the two main characters in this film brilliant, or are they insane? Andrew (Miles Teller [who or whom--I can't decide if it's subjective or objective], who or whom I like so much in The Spectacular Now) is a drummer at a prestigious school of music in New York. Teacher and conductor Terence Fletcher (J. K. Simmons) invites Andrew to play with the core jazz band. Fletcher reels in his catch with kindness and won't let the student off his sadistic hook.

I've loved J. K. Simmons for a long time. He's hilarious with Tom Hanks in The Ladykillers. He's excellent as the father of the titular* character in Juno. I didn't know he had a Terence Fletcher in him. He plays supporting parts, and for this movie, he won a number of Best Supporting Actor awards, including the Academy Award. But is this really a supporting role, or was it pushed as a supporting role because his win would be a sure thing? And what about Miles Teller**? If Simmons is best supporting actor, then why isn't the actor he supported sporting a Best Actor Academy Award in his trophy case? Teller wasn't even nominated.

Written and directed by Damien Chazelle, he has stated that the movie is partially based on his experience as a band student in high school, and the intimidation factor he felt with his instructor.

The question we face here is the following: How far can a teacher go to turn a promising student into a genius?

Terence Fletcher: There are no two words in the English language more harmful than good job. . . . I was there to push people beyond what's expected of them. I believe that's an absolute necessity. . . . I never really had a Charlie Parker. But I tried. I actually fucking tried. And that's more than most people ever do.

As the parent of two brilliant oxymorons, and yes, I know I brag a lot about the kiddles, I can tell you that if one of my kids had a band teacher like Terence Fletcher, the man would wear a trombone around his neck and a trumpet up his ass. But then, I paid attention to my children. I still check on them. Andrew's family does not support him, though his father improves somewhat.

However, I know some teachers pushed my kids to be great. I'm not a pusher. I'm filled with pride, and I encourage the people I love. My children probably upped their game because of pushing from teachers.

I don't want to reveal too much. I understand the end of the movie. We all have different life experiences that will contribute to our impressions of Whiplash. Whiplash earns The Janie Junebug Seal of Highest Approval, although I don't know if many of you will agree with me. In addition to Best Supporting Actor, Whiplash won the Academy Awards for Best Sound Mixing and Best Editing. It was also nominated for Best Writing, Adapted Screenplay and Best Picture. I think you will love it, or you will hate it.

This movie is not for children. Handle with care around teens.

One scene I feel I can discuss without spoiling the movie is when the bus breaks down on the way to a jazz band competition. This experience is real for me because of children in my family. One of my nieces went on a band trip. The bus broke down, and the kids slept in a McDonald's parking lot. Most of them didn't have enough money to get something to eat. Favorite Young Man went from Maryland to Florida for a band competition. When it was time to go home, the bus would only run in reverse. They couldn't go backwards from Florida to Maryland, so they were delayed while the company got another bus.

I feel this movie. I feel it strongly. I understand if you don't.

*I like the word titular because it starts with tit, and I feel smart when I use it.
** Miles Teller is in every scene in this movie. He does much of his own drumming. Some of the blood you see on the drums is his.
Posted by Janie Junebug at Thursday, February 26, 2015