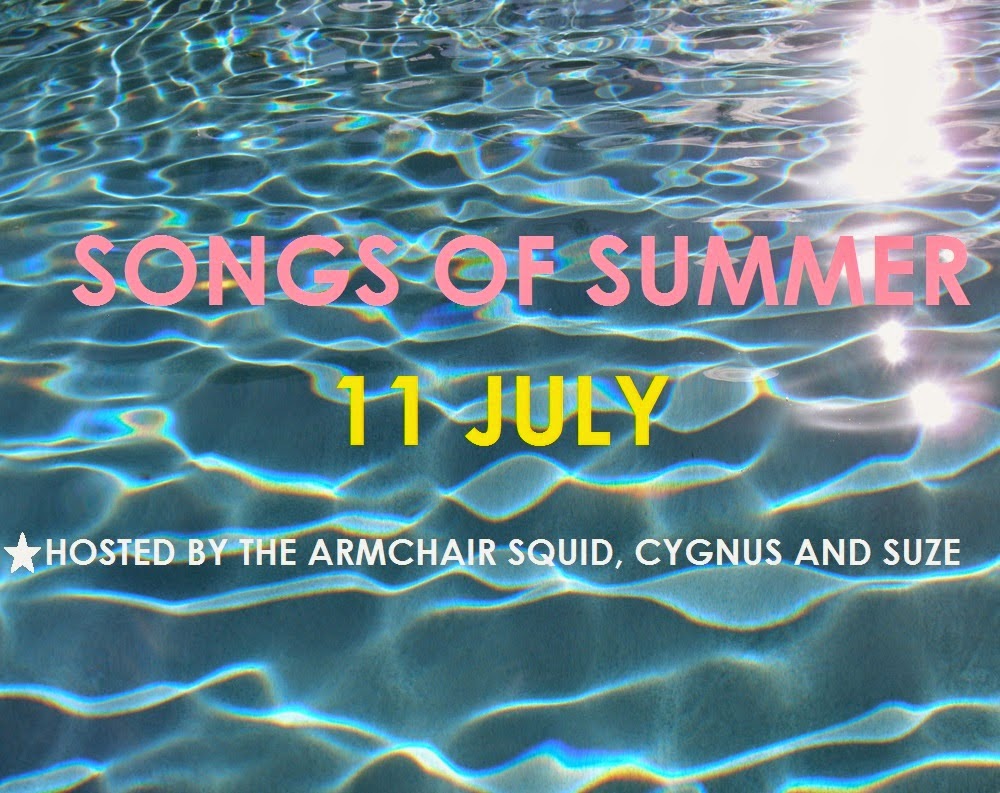 Welcome to the Songs of Summer bloghop, hosted by the Armchair Squid, Cygnus and Suze.  On Friday, July 11, 2014, please join us by posting 5 of your favorite summer songs and sharing some memories about them.  Maybe between us, we can build the perfect soundtrack to accompany us over the next few months.  If possible, include links so we can hear these gems.  And, if you're in the southern hemisphere, join us to dance those winter blues away!

I think the music of summer was especially important to me when I was a teenager. Music provided a connection with the world, gave me solace when I was lonely, and became the background music when I sang into my little tape recorder. Those lyrics were poetry and parties and, sometimes, pandemonium (according to my parents).

A lot of my songs of summer are associated with summer loves: the boys I dated, the ones who got away, the ones from whom I ran.

5. Seals and Crofts made me dream of a future with someone I loved.

4. It's not summer without The Beach Boys.

3. The theme from the movie Jaws reminds me of my most hilarious date ever.

2. I've seen America in concert five times. I talked to Dewey and Gerry and got their autographs, but never saw Dan. He left the group relatively early and passed away a few years ago. How do I choose a song of theirs? They all make me think of summer. I guess I have to go with the song that has my name.

1. RFK Stadium. Fourth of July. Linda was still alive. I think it was 1989. I was young enough to think I'd be married for the rest of my life. I didn't know something better awaited me, but this one night was magic.

Here's a bonus song of last summer with Middle Child. I finally figured out how to put the video on my blog. Sorry I don't know how to make it wider.


I hope you enjoyed my choices. If you'd like to join the bloghop, just hop on over to The Armchair Squid to sign up. Willy Dunne Wooters, I wish I had a summer love song for you. I guess I sing my love to you when I play my piano.

P.S. I suppose you want to know about the most hilarious date ever. I've told this story before, but many of you weren't following me when I posted about it, or you've probably forgotten it.

Jaws was the blockbuster movie of the summer. I went to see it with Mike, who was oh! so hot. We made out until the movie started. I could hear the adolescent boys seated behind us moaning and groaning about how they had to sit behind the lovers. Then the movie began and we were mesmerized, much too busy to kiss. The moment that the shark suddenly rose from the water and moved toward the boat was terrifying––so terrifying that Mike fell out of his seat. I saw him from the corner of my eye, looking up at me. Had I seen? I had, but I didn't let him know. I stared at the screen because I didn't want him to be embarrassed.

I have no idea what happened to Mike. It wasn't until many years after our date that I revealed Mike fell out of his seat during Jaws.
Posted by Janie Junebug at Friday, July 11, 2014