Please forgive my absence. My tummy has been quite unhappy, but I believe I have recovered enough so you won't catch whatever I had. Just don't get too close to your screen while reading this post.

Since it's a holiday weekend, I'm going to name some movies I've seen on Netflix Screaming of late. These movies are also available on DVD. Instead of giving you a full review of each movie, I'll give you a brief synopsis, and then award X number of pickles to the movie. If you've been hanging around here long enough, you'll know that pickles disgust me. Thus, if a movie has zero pickles, then it's a super-great movie. If a movie has pickles, then watch out. The more pickles, the worse the movie.

And I really don't wanna hear about how many movies I watch.

BRAVE MISS WORLD (2013) This documentary is about Linor Abargil of Israel who was raped a few weeks before being crowned Miss World. She goes after the guy and says that women who are raped shouldn't need to hide their faces when they go to court because they didn't do anything wrong. ***Pickles

DEAR MR. WATTERSON (2013) This documentary (Yeah, I know I watch a lot of documentaries; so does Favorite Young Man -- you wanna make something of it? He's probably taller than you are, better looking, and smarter [description of FYM's superiority does not apply to Middle Child or The Hurricane]) is about how many people still love the comic strip Calvin and Hobbes, and also about artist Bill Watterson's refusal to become a public persona and turn Calvin and Hobbes into a multi-million dollar marketing machine. So those car stickers of Calvin peeing on things? You know I hate those, right? Those are not authorized.   Pickles  Just in case you're confused, no asterisks can be seen before the word "Pickles" because I liked this movie so much that I don't associate it with pickles in any way, shape or form.

DEREK Season Two (2012) British TV series created by Ricky Gervais, who plays Derek, a sweet-natured guy who is maybe on the slow side, but is very quick when it comes to caring about other human beings. He works in a nursing home. I'm up to episode three. I watched the first season and really liked it, too. **Pickles

ORANGE IS THE NEW BLACK Season Two (2014) What can be better than women in prison? Willy Dunne Wooters and I loved the first season, and we loved the second season even more, especially the last six episodes. Pickles

AN UNREAL DREAM: THE MICHAEL MORTON STORY (2013) This documentary is about a man named Michael Morton, duh, who was convicted of killing his young wife in front of their son, when he was a toddler. I won't tell you how many years he was in prison before The Innocence Project became involved. Barry Scheck, I love you.  Pickles

BOMB GIRLS (2012) I like this Canadian series about women, and a few men, who work in a munitions plant during World War II. I've watched five out of 18 episodes. ****Pickles

20 FEET FROM STARDOM (2013) This film about backup singers won the 2014 Academy Award for Best Documentary.  Pickles

BROADWAY IDIOT (2013) This documentary is about turning Green Day's album American Idiot into a stage production, which ended up on Broadway. Before going to Broadway, it premiered in Berkeley, where The Hurricane saw it and met Billy Joe Armstrong's mom and Billie Joe Armstrong's son. She loved the show and said the set was amazing. I love Green Day. I love American Idiot. I love this film.  Pickles

IT'S A DISASTER (2012) Willy Dunne Wooters and I think this movie is hilarious in its own quirky way. Four couples are in a house for their regular get-together when they learn the world has become toxic and they can't go outside. How are they going to spend their time together? What about the people who are late for the party?  Pickles

If this post doesn't give you any ideas about stuff to watch this weekend, then I cannot help you. That's all there is to it. The decision to let your kids watch something––or not––is yours.

I want to make sure you all noticed that a whole big bunch of people begged Target to create a policy against open carry and Target pretty much said "Eff off," but the day after I said I AM BOYCOTTING TARGET, then they asked their shoppers to please leave their guns at home. My head is so big I'm surprised I can get it through the door. And I do not have delusions of grandiosity.

Well, all righty then.

Fishducky sent me the following: 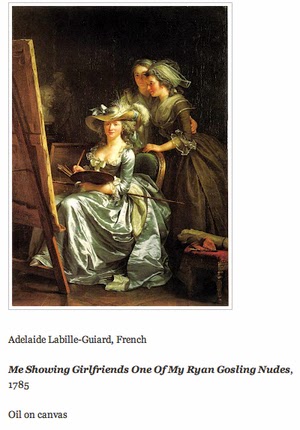 Of course it's a painting of Willy Dunne Wooters. Don't be ridicurous, as Franklin says.

Our BULLY FOR YOU guest postess on Monday will be Linda of PRACTICAL PARSIMONY.

I haven't forgotten that I need to tell you the story about the refrigerator, and I have an award to accept from Shecky Shady.

All in good time.