I wasn't going to watch Gravity (2013, Rated PG-13, Available On DVD). It's just a boring movie about a couple of people floating around in space, right? 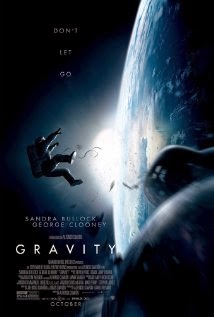 But then Gravity won seven Academy Awards, including Best Director for Alfonso Cuaron (the first Hispanic person to win the award), and I decided I'd better check it out.

I'm glad I did. It's beautifully made.

Dr. Ryan Stone (Sandra Bullock), a medical engineer, is on her first space shuttle mission with astronaut Matt Kowalski (George Clooney) in command. During what should be a routine space walk, the shuttle is destroyed. Stone and Kowalski float off into the blackness of space, seemingly without any hope of rescue.

The special effects and lighting in this movie are gorgeous. The Internet Movie Database explains:

Alfonso Cuarón, cinematographer Emmanuel Lubezki, and visual effects supervisor Tim Webber decided they couldn't make the film they wanted using traditional methods. For the space-walk scenes, says Webber, "We decided to shoot (the actors') faces and create everything else digitally." To do that, Lubezki decided he needed to light the actors' faces to match the all-digital environment. Whether the characters were floating gently, changing direction or tumbling in vacuum, the facial light would need to perfectly match Earth, Sol and the other stars in the background. "That can break easily," explains Lubezki, "if the light is not moving at the speed that it has to move, if the position of the light is not right, if the contrast or density on the faces is wrong." Lubezki suggested folding an L.E.D. screen into a box, putting the actor inside, and using the light from the screen to light the actor. That way, rather than moving either Sandra Bullock or George Clooney in the middle of static lights, the projected image could move while they stayed still. The "light box", key to the space-walk scenes was a nine-foot cube just big enough for one actor.

More important to me, though, are the themes in the movie. The director and many other people seem to focus on the theme of rebirth. I can understand that, but I see Gravity more as a film about uncaring nature. The romantic poets, such as William Wordsworth, focused on the interaction between the pastoral and the individual. Remember Wordsworth's Intimations of Immortality?