Today I have two movies for you that Willy Dunne Wooters and I love. They share the theme of the importance of family loyalty and love.

The first is Girl Most Likely (2012, Rated PG-13, Available On DVD And Netflix Screaming). 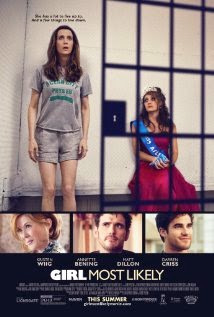 This movie is a hoot. It was Kristen Wiig's first after her huge success with Bridesmaides, which WDW describes as lowbrow humor. Although I won't say that Girl Most Likely is a highbrow film, it's certainly a lot of fun, and the acting is excellent.

Imogene (Kristen Wiig) is a native of Atlantic City who now lives in New York City and tries to fit into her posh boyfriend's life, but it's obvious that she's different and his friends look down on her. After all, Imogene didn't go to Andover or Spence. However, when she finished college, she won a grant that was meant to allow her to become a playwright.

But she didn't. She frittered away the money and avoided her family. When her New York-life takes a sudden turn for the worse, she finds herself back in Jersey . Suddenly she's forced to live with her brother Ralph (Christopher Fitzgerald), her loony mother Zelda (Annette Bening), and her mother's even loonier boyfriend George (Matt Dillon). Imogene also finds a man named Lee (Darren Criss, who plays Blaine on Glee and is so hot in this movie) sleeping in her bed because her mother has rented out her room.

Although I love Wiig and Fitzgerald and Criss, it's Bening and Dillon who make Girl Most Likely an absolute riot. Dillon's character isn't just George. He's George Bousche––pronounced Boosh––and he's a CIA operative who can't tell anyone his real name. Bening is great because she plays her role as Weird Mother and Girlfriend of the Year completely straight; she believes The Bousche is what he says he is. And The Bousche will not drop his CIA cover story for a single second. You'll love seeing what happens with Zelda and The Bousche.

This movie is funny and smart and silly and well made. I revel in the devotion that Imogene and Ralph show toward one another, and in the progress that Imogene makes in her life. I love a happy ending.

Girl Most Likely earns The Willy Dunne Wooters and Janie Junebug Seal of Highest Approval. Just go with it and have fun. I don't think it's for children, but teens might like to watch with you.

And now I have a movie for you that brought tears of joy and sadness to my eyes. I think Willy Dunne Wooters might have sniffled a little, too. About Time (2013, Rated R, Available On DVD) has a delightfully clever screenplay, beautiful acting, and one of the sweetest love stories ever––and it's not merely a love story between the two main characters. It's the story of a family's love for one another. 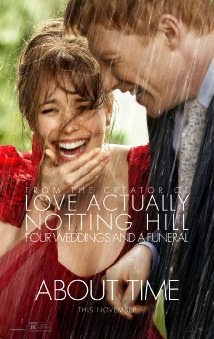 When Tim (Domhnall Gleason) turns 21, his "Dad" (Bill Nighy) informs him that the men in their family are able to travel in time. They can't go forward in time. They can only return to events that have already occurred, and they can't change history. When Tim leaves his rural home to work in London as a lawyer, he meets and falls in love with Mary (Rachel McAdams). Tim uses his gift to win Mary's heart, to create the perfect romantic proposal, to make sure he has the perfect best man's speech at their wedding, to spend extra time with Dad when it's of the utmost importance, and to help his sister, to whom he's wonderfully loyal.

Best of all, Tim learns from his time travels to enjoy each day, to appreciate his family, and to cheer on his friends. He knows how to fill his relationships, or simple chance encounters, with love and joy.

Tim: We're all traveling through time together, every day of our lives. All we can do is do our best to relish this remarkable ride.

I like About Time so much that I ordered it from Amazon. I don't buy many movies, but this one is a must have. I know the Wooters man and I will watch it once or twice a year while we hold hands.

About Time is not for children. I would allow teens to watch it. This movie earns The Willy Dunne Wooters and Janie Junebug Highest Seal of Glowing, Loving Approval.

I wish you all a delightful weekend, filled with pleasant pursuits.