The events portrayed in Fruitvale Station (2013, Rated R, Available On DVD) took place in The Hurricane's part of the country, the lovely place we call The Bay Area in California. The Hurricane loves it there, but she did not go to see Fruitvale Station with her friends. She thought it would upset her too much, and after watching the DVD, I understand her feelings. It's an intense, emotional movie. 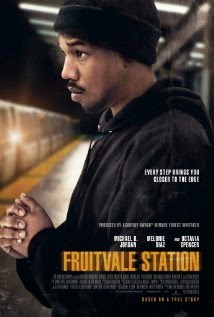 The movie purportedly tells the story of the last day in the life of a young man named Oscar Grant (Michael B. Jordan) on December 31st, 2008. Oscar's life isn't going too well. He's 22 years old and not long out of prison. He knows he needs to be a better father to his four-year-old daughter and a better man for his girlfriend, the child's mother Sophina (Melonie Diaz).

On New Year's Eve, Oscar and Sophina plan on driving into San Francisco so they can enjoy the city's celebration. Oscar's mother, Wanda (Octavia Spencer, Academy Award winning actress for her role as Minnie in The Help), begs Oscar to take the BART into the city. She's sure he'll be safer on the BART.

Sadly, controversial events occur at the Fruitvale BART station, and Oscar never returns home. I hate to tell you more than that because I don't want to ruin the movie for you.

Michael B. Jordan is excellent, giving an understated yet moving performance as Oscar. Octavia Spencer absolutely glows, whether she's happy or grieving. What a beautiful actress she is.

Written and directed by Ryan Coogler, Fruitvale Station debuted at The Sundance Film Festival, where it won The Grand Jury Prize "for its skillful realization, its devastating emotional impact and its moral and social urgency." The movie went on to win multiple awards from film festivals all over the world.

Quite simply, it's beautifully made. It's not a blockbuster, over-the-top movie. It's simple and moving. We gradually get to know Oscar better so we can see him as more than a news headline.

I won't wish you happy viewing because this movie isn't happy. Instead, I wish you informed and thoughtful viewing. I didn't know about Oscar Grant until I saw Fruitvale Station. Watching it led me to research what happened to Grant, and I hope you'll do the same.

Spoiler Alert: After I wish you infinities of love, I'm going to scroll down, down, and down so I can provide you with a piece of information you might not want to read until after you see the movie.

Fruitvale Station is not for children. You can probably watch it with older teens, but if you do, I urge you to sit down at the computer with your child so you can learn more about the real Oscar Grant.


Spoiler Alert: The sequence at Fruitvale Station was filmed on the exact spot where Oscar Grant was shot. The bullet hole was still in the floor.
Posted by Janie Junebug at Thursday, July 10, 2014