BULLY FOR YOU BOOK NOOK: CLEFT HEART BY KARL SCHONBORN

Today I have a very special BOOK NOOK presentation for you––a book to read in tandem with our BULLY FOR YOU series. It's Cleft Heart: Chasing Normal by Karl Schonborn. Perhaps you noticed that Karl weighed in on some of your comments last week with the first BULLY FOR YOU post.

I hope you'll get to know Karl. This is what he looks like:

And here's his book: 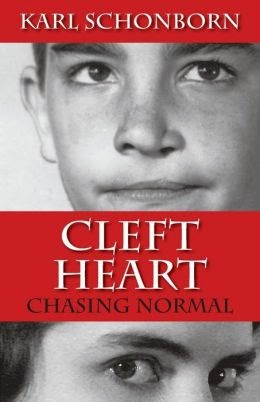 Karl told me: I wrote Cleft Heart: Chasing Normal mostly to show kids with facial differences that they can rise above, that normal is a state of mind, that you’re only as “normal” as you feel. And, too, I wrote it because I found out no cleft had ever written about the cleft palate experience before. Zounds! Can you imagine?

Yes, Karl Schonborn was born in 1943 with a cleft lip and palate, "meaning an unjoined lip and gum, and a hole in the roof of his mouth". But this memoir offers far more than the story of a boy with a facial deformity.

It has a universality in that we all need to connect––to communicate––with other people. Whether we have complications because of a speech impediment or shyness or acne, each of us is alone, reaching out for the interconnectedness of human kind, or "oneness", as our friend Dee Ready at coming home to myself calls it.

Schonborn writes plaintively of an early inability to connect:

But nothing compared to the pain in my heart. It reminded me of my first public humiliation years ago when my mom inadvertently left me with a group of strangers for a minute. Judgmental eyes and headshakes shamed me after I made a simple statement in front of the group. Wanting to redeem myself at once, I screwed up my face and courage and concentrated on enunciating during a second attempt.

As the words started in my throat, I contracted my lips, tensed my cheeks, and gritted my teeth to make the words more intelligible. But to no avail. By the time the words emerged, they still sounded nasal and whiny as if coming from an underwater source. Upon hearing my second try, the people staring at me needed no further proof, given my scarred, asymmetrical face. A couple called me names I didn't understand. Most turned their backs and left. I stared at the ground until Mom reclaimed me. I felt awful until I told Mom. We both cried then.

Schonborn wasn't completely alone because he had such a strong relationship with his mother, who championed his causes and made sure he received the medical treatment and speech therapy he needed. As his voice and face became more "normal", the still young boy embarked on a friendliness campaign to extend his connection to the world. And all the while, he stood up to bullies who taunted and mistreated him.

Schonborn also travels Forrest Gumpishly, though with a much higher IQ, through the history of the United States during the '40s, '50s, and '60s. He takes part in the beginnings of Silicon Valley, learns about non-violence from Joan Baez and her cohorts, and encounters future Secretary of State John Kerry during their college days. Cleft Heart includes a captivating endorsement by Kerry. Schonborn travels much of the world as a young man, on the literal and figurative road to maturity–a maturity he needs desperately when he faces a major loss.

Schonborn writes in the voice of a person with a great deal of perception, yet he maintains a sense of humor throughout much of the book. Cleft Heart: Chasing Normal earns The Janie Junebug Highest Seal of Approval.

I had the pleasure of working as one of the editors on this book. After it was published, I intended to scan it before writing my review, and instead ended up reading the entire book again because I felt so caught up in it.

Here's the trailer for Cleft Heart:

And now I wish you happy reading.

Two notes: First, I did not receive any compensation for writing this review. Second, we'll have the first of our BULLY FOR YOU guest posts one week from today. Rachel from When A Lion Sleeps, Let It Sleep, will share her firsthand knowledge of being bullied.
Posted by Janie Junebug at Monday, May 19, 2014