A CONVERSATION WITH WILLY DUNNE WOOTERS 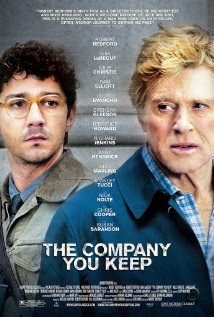 I liked the movie, but Willy Dunne Wooters absolutely loved it. We sat in our chairs and chatted about what we liked, and I pointed out what I didn't like.

The movie is about some former members of the Weather Underground (the militant wing of The Students for A Democratic Society) who are still in hiding. One is taken into custody, and then others, including Redford's character, are in danger of being charged.

I'll provide our conversation as closely as I can remember it:

Janie Junebug: That's a good movie, but Robert Redford is so much older than the other actors who are supposed to be former members of the Weather Underground. And it's pretty weird that he has a young child. The man is 76 in real life, and he looks it.

JJ: Jeremiah Johnson, Downhill Racer, Butch Cassidy and The Sundance Kid. Yeah, I know those were real pictures of him, but he still looked too old for the part.

WDW: Well, maybe his character was just the oldest one in their group when they were young, so he's older now. The movie I'm trying to think of from that time that he was in had him as a cowboy and he's with Jane Fonda and he doesn't like the way the horse is treated so he rides away. It was They Shoot Horses, Don't They?

JJ: Huh? They Shoot Horses, Don't They? is about a dance marathon during the depression. Robert Redford isn't even in it.

WDW: About a DANCE MARATHON? No, it's not. It's Robert Redford and Jane Fonda and he's a cowboy.

JJ grabs her laptop and opens it. She taps on the keys.

JJ: Here it is on IMDB. It was Jane Fonda and Michael Sarrazin. They're in a dance marathon and she's really miserable and she wants to be shot like a horse being put out of its misery. blah blah blah yada yada yada snrt snrt snrt. That's They Shoot Horses, Don't They? I remember seeing it a long time ago.

WDW: That can't be right. It's Jane Fonda and Robert Redford and he's a cowboy and he's upset about the way the horse is treated. Let me see that.

JJ hands over the laptop so WDW can see for himself.

JJ: I think the movie you remember might be called The Electric Horseman. I never saw it. Let's IMDB it.

JJ taps on the laptop a little more and finds the Robert Redford movie. She reads the description of it aloud to WDW.

WDW: Yeah! That's the movie. So They Shoot Horses, Don't They? is about a dance marathon. And Robert Redford isn't in it?

JJ: That's correct. Robert Redford is not in They Shoot Horses, Don't They?

JJ points her index finger at her head and pretends to pull the trigger of her imaginary gun. Her head slumps to the side.