FAVORITE YOUNG MAN & STEPH WANT TO TALK TO YOU ABOUT DIABETES

Today Favorite Young Man and his lovely lady, Steph, want to talk to you about their fundraising efforts on behalf of the American Diabetes Association. 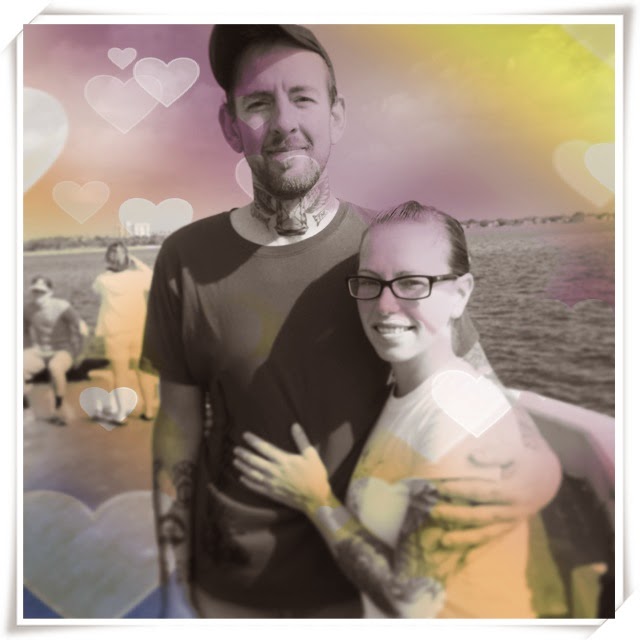 Take it away, you two:

Hi! Steph here. I love to ride my bicycle. Nothing else is like it. When you're in a car, you're separated from the world. When you're on your bike, you're part of everything, with the wind blowing in your hair. I can smell the flowers and the trees. I also like riding my bike because I'm an environmentalist. I just completed two environmental science degrees.

I organized Sunday bike rides in Jacksonville, Florida, because it raises cycling awareness. We all follow the rules and ride safely. It also increases our sense of community.

This tall, handsome man showed up for a bike ride one week. I knew I was done looking as soon as I saw him. I'd never thought before, He's the one. Now we don't have to ride solo ever again. We ride together, and I told him I would follow him anywhere.

No wonder Janie Junebug calls him "Favorite Young Man" instead of Dave. That's his name, but I call him "Babe".

Now, we're preparing to ride in The American Diabetes Association's Tour de Cure, a series of fundraising cycling events held in 40 states. Ours will be a 100-mile bike ride throughout Jacksonville. It's this Saturday, May 17th. The money we raise from sponsors will all go to diabetes research.

Dave and I have friends and family members affected by diabetes. A good friend of mine had pancreatic cancer. As he was going through the chemo, he was too sick to get out of bed for his shot of insulin. So diabetes killed him while he was on the way to recovering from cancer.

Dave wants to say something to you now.

Favorite Young Man here. My Uncle Howard (my mom's brother-in-law) died recently because of heart problems, but he also spent many years suffering from diabetes. For about the last 15 years of his life, he couldn't feel his feet. One time he hurt his foot, but he didn't know it. His job involved a lot of walking. People shouldn't have to walk around on feet they can't feel. I'm going to ride this 100 miles in my Uncle Howard's honor.

Steph and Dave together now:

We ride because we are proud to do our part to Stop Diabetes. We decided to team up to change the future and make a positive impact on the lives of those who are affected by diabetes. We are committed to ride and raise money in this inspirational event, not only because 26 million people in the United States have diabetes, but because we personally know some of them, and want to do something about it.

Through our hard work, we CAN make a difference in the fight for a cure! We can raise awareness through cycling, and raise funds to support the effort. The bicycling community knows all too well the ups and downs when it comes to health. This ride will just further our initiatives to have a happy, healthy, and loving community of people. We are the future!

We are getting on our bikes, raising funds, and supporting this great cause!! Our bicycling community is part of a larger community . . . so we want to show our support and love to those living with diabetes.

Will you please help us? You can make a donation at http://main.diabetes.org/goto/StephMH or

Thanks for helping us!

Janie Junebug back with you again. I donated $100, and Willy Dunne Wooters has pledged to do the same. Whether you can give the $5 minimum or $100 and send your positive thoughts, prayers, and love to Steph and Dave, you know I appreciate it.