American Hustle (2013, Rated R, Available on DVD) is worth watching just to see Bradley Cooper with his hair in little pink curlers. 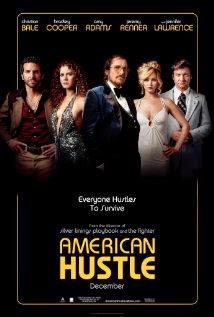 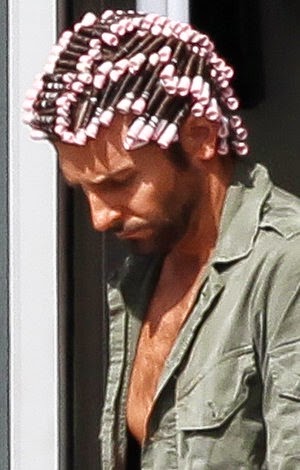 This very loosely based-on-the-facts film fictionalizes the Abscam scandal of the late 1970s and early '80s. Con man Irving Rosenfeld (Christian Bale) and his mistress, Sydney Prosser (Amy Adams), are dragged into the world of FBI agent Richie DiMaso (Bradley Cooper). DiMaso involves them with the mafia, and especially with politician Carmine Polito (Jeremy Renner).  DiMaso's wild plan to catch politicians taking bribes from Arabs could all be ruined by his own craziness and the intervention of Rosenfeld's wife, Rosalyn (Jennifer Lawrence).

It says a lot about this movie that it was nominated for all the major Academy Awards, including the four acting categories: Christian Bale, Best Actor; Amy Adams, Best Actress; Bradley Cooper, Best Supporting Actor; and Jennifer Lawrence, Best Supporting Actress. Jeremy Renner also is outstanding, as is Louis C.K. as DiMaso's much put upon but ultimately triumphant boss.

American Hustle is character driven, and I like that in a movie as well as in a book. The plot is a little wild, but it can be followed. It features some very funny moments, especially between Bradley Cooper and Louis C.K., and Jennifer Lawrence with anyone or by herself.

It did not win any Academy Awards, but I favor Amy Adams over Cate Blanchett, though Judi Dench should have won Best Actress. I like just about anybody instead of Cate Blanchett in Blue Jasmine. I could have beat Cate Blanchett for my role as craziest person in Jacksonville, Florida. It's not that Cate Blanchett isn't a good actress. She simply didn't deserve this particular win.

Jennifer Lawrence singing Live and Let Die while she cleans house is quite a sight.

This movie is not for children. Older teens? It's up to you.