Today I present three movies for your consideration. All are available on DVD. I don't go to movies in theaters because it's ridiculously expensive, but I kind of hope someone will take me to see Anna Karenina. I'm not crazy about Russian writers, but I do like poor Anna. I guess I could see it alone, but I like theater going to be a shared experience.

Now, on with this week's movies. The first is Big Miracle. 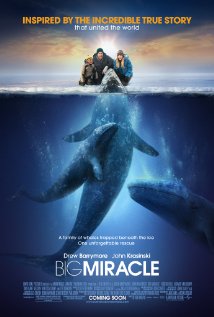 If you want a movie for the entire family, then this one is your choice. John Krasinski plays a reporter covering the story of a family of whales trapped in the ice at Barrow, Alaska. He gets his former girlfriend, a Greenpeace worker played by Drew Barrymore, involved in the battle to save the whales.

This movie is not perfect by any means, and I don't endorse it wholeheartedly. First, it's extremely unrealistic, but that probably wouldn't matter to children. People are out in temperatures well below zero, yet they aren't dressed properly for the weather. Even so, no one is shivering and shaking. One character is splashed by one of the whales, but the water doesn't freeze on his face. Some brief clips at the conclusion of the movie show the real people (yes, this movie is based on a true story) so we know how they actually had to dress, and we see a man with ice crystals in his beard.

I also don't like it that this movie has a little bit of profanity. I admit it's just two or three words, but they are totally unnecessary. If profanity isn't something that's expected of a character, then why add it?

You should also be prepared to discuss death with your children if you watch this movie.

I give Big Miracle The Janie Junebug Halfhearted Seal of Approval.

Our second movie is Friends With Kids. 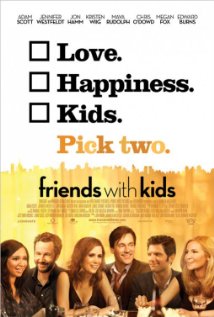 Just don't even bother with this one. Two friends want to have a child. So they decide to have a baby together and share custody. The arrangement works -- until it doesn't. The last line of this movie is, I want you to f*** the sh** out of me.

I mean, really? Hell to the no! I give Friends With Kids The Janie Junebug Seal of Disapproval.

Last, but not least, is the somewhat quirky Newlyweds, an Edward Burns film. I like Edward Burns. 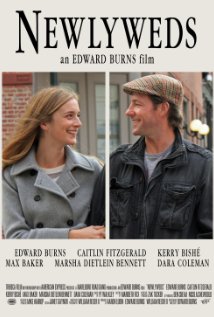 The newlyweds think they have the perfect marriage because one works during the day and one works at night, so they don't spend too much time together. But, of course, relatives have to interfere, so what will happen to the newlyweds? Can they maintain their supposedly wonderful marriage? You'll have to watch it to find out because I'm not revealing too much plot.

I give Newlyweds The Janie Junebug Seal of Approval, but I give it conditionally. This movie is not for children, and if you decide to watch it with your sweetie or by yourself, don't expect something spectacular.

I realize I haven't given you anything great to watch this weekend, so what I really recommend is the following: If the weather is decent where you live, then get outside and have some fun. Play ball with your kids. Ride bikes. Go for a walk with your significant other or with a friend, and maybe the two can be in the form of one person. OR go to a fall festival. That could be a lot of fun.

If the weather is lousy, then play a board game and read a good book. Take a nap.

You can have fun this weekend without a movie.