I have two movies to discuss with you today, both released in 2011 and both available on DVD.

The first is a Japanese documentary that's worth watching: Jiro Dream of Sushi. 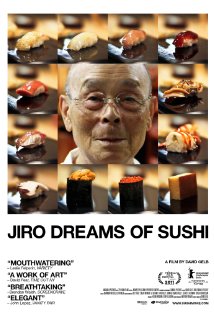 Jiro Ono, an 85-year-old sushi master, serves sushi at his restaurant, which seats eight customers. That's right -- sushi for eight people. No appetizers, no desserts, no other entrees. Just sushi, for which he charges $300 a plate.

We get a look at the sushi preparation; Jiro's relationship with his two sons, who also make sushi; and he visits his boyhood home. Stylistically, this movie is lovely. I also like Jiro's philosophy and his comments on his work ethic, which are sprinkled throughout the film:

Jiro Ono: Once you decide on your occupation... you must immerse yourself in your work. You have to fall in love with your work. Never complain about your job. You must dedicate your life to mastering your skill. That's the secret of success... and is the key to being regarded honorably.

Now onto our "not movie" weekend, which you may have guessed means that I don't like this film. It's called Straw Dogs, and it's a remake of a 1971 film that starred Dustin Hoffman. I don't know if the first one was any good, but the second one stinks. It's lewd, crude, lurid, and violent. 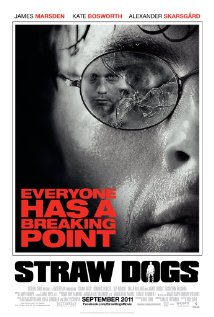 Straw Dogs has The Janie Junebug Seal of Very Strong Disapproval. Please don't waste your time on it, but should you choose to watch it for God knows whatever reason, it's most definitely not for children.

And that's all I have to say about that.