PUT ON YOUR GIRDLE. WE'RE GOING TO THE ER.

My mother wouldn't go to the grocery store without changing her clothes so she was more dressed up -- and I'm talking about right up to the day she went in the hospital to die.

When I was little, I remember her attending events such as a Military Wives Tea wearing a hat and gloves. I still have the hat and gloves I wore to my oldest sister's wedding. We were always dressed to kill because Mother would have murdered us had we not dressed properly.

What was not so lovely and pleasant, though, was that we had to get dressed up to see the doctor, no matter how sick we were.

One of my sisters once had a terrible case of stomach flu or food poisoning or something. She spent a hideous night alternating between diarrhea and vomiting.

When morning finally came and she felt a bit better, my mom insisted that our dad take Sister to the Emergency Room. Of course, the time to go would have been when she was really, really out of control and passing out sick.

But, no. Mother waited till morning. When she was better.

To add an icing of misery to her misery cake, Sister had to dress up to go to the ER. She was forced to don her best dress, stockings, and a girdle. She probably weighed about 80 pounds, but in our house, once you reached a certain age you wore a girdle. 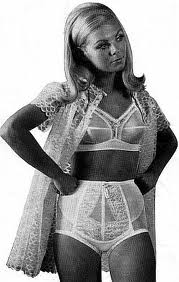 But she got dressed as ordered (or she would have been beaten, which, of course, cures any illness), and our father carted her off to the emergency room, where a doctor said, Well, I guess she's fine now.

Some things about the olden golden days were great. But others, such as putting on a dress and girdle to go to the emergency room . . . bleah.