MY FATHER'S LOVE: THE LEGACY

Yesterday I repeated a post I wrote last year about a memoir by Sharon Doubiago called My Father's Love: Portrait of the Poet As A Young Girl. Today I'd like to write about the second volume of Doubiago's memoirs, My Father's Love: The Legacy. 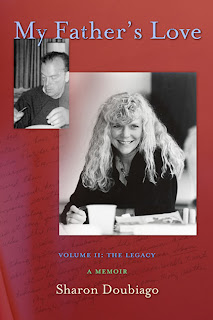 In this second volume, poet Sharon Doubiago considers the effect of childhood rape by her father on her life and her family's lives as an adult looking back on events and living the aftermath.

Her father's deathbed confession that he raped her at the age of seven brings no closure for Doubiago, not with a mother who denies the event and a younger sister who is strangely jealous of their father's attention to Sharon, even if it was painful and sexual. Doubiago's sister -- called "Bridget"* in these memoirs -- is a constant source of pain to Sharon, belittling and demeaning her, spreading rumors about her, filling their relationship with a hatred unwanted and painful to Sharon.

It's a classic case of "blame the victim," as if Sharon should be punished for attracting her father sexually, and, moreover, should not tell the truth about his inappropriate and abusive behavior toward her.

Bridget arrives again. Very soon we're fighting. About what? I was trying so hard not to let this happen. Mama is sitting in the dining room, silently watching just as she did when Daddy and I fought. Something Bridget says is such a lie, such a distortion, so unfair, my heart starts hurting, my breath is gone, though I'm screaming.

Just leave. I get up to leave. This is what I must learn to do. I'm at the font door, opening it. She comes at me, throwing her whole self into me, scratching and biting.

The legacy of her father's love is not Doubiago's alone to bear. It tears apart an entire family and nearly everyone who becomes involved with them. And eventually, Doubiago learns that her father should not have been left alone with his granddaughters.

I relate so strongly to Doubiago's writing that it hurts, physically and emotionally; yet it comforts me to know I am not alone -- I am not the only person who has suffered from a family legacy, a legacy of lies, a legacy of  abandonment, a legacy of degradation. We scream we are not liars and are condemned as hysterics, as mentally ill.

I strongly recommend these two volumes to you, dear friends, no matter how painful the reading may be, because pain often brings enlightenment, and eventually, relief.

The first volume of My Father's Love is currently not available from amazon. However, you can request the book and receive an email when it is back in stock. Go to http://www.amazon.com/My-Fathers-Love-Vol-Portrait/dp/0984130403.

The second volume of My Father's Love also is not available from amazon at this time. Please visit http://www.amazon.com/My-Fathers-Love-Vol-II/dp/0984130438 to place an order for the future.

Perhaps it should come as no great surprise that Doubiago had difficulty finding a publisher. Many in the publishing world will not accept books about rape or abuse because of pressure from the False Memory Syndrome Foundation and because of books that portray raped and injured children as liars and fantasists. Doubiago writes in her Author's Note: "For almost fifteen years not a single incest book has been published by a major U.S. press -- this culminating an era that had uncovered the fact that one quarter or more of all females are raped in childhood. The taboo of the incest book is still very powerful, censorship being an aspect of the silent shadow."

To purchase the books now, I recommend ordering them directly from the publisher, Wild Ocean Press, at http://wildoceanpress.com/.