Our film today won The U.S. Documentary Grand Jury Prize at Sundance. It's The Wolfpack (2015; Rated R; Available on Netflix Streaming, DVD, and for a price on Amazon Prime). 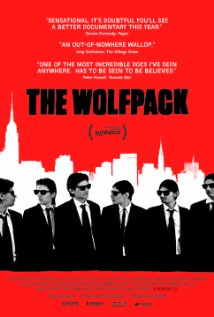 A man in Peru, Oscar Angulo, who is a follower of Hare Krishna, marries an American traveler named Susanne. They move to New York and have seven children. The boys are Mukunda, Narayana, Govinda, Bhagavan, Krisna (Glenn), and Jagadesh (Eddie), and their sister is Visnu.

Oscar believes the streets of New York are a prison. Work is a prison. He locks up his family in an apartment on Manhattan's Lower East Side. They live on welfare and a stipend their mother receives for homeschooling them. Their father allows them to leave the apartment in carefully supervised outings with him, during which they are not allowed to speak to anyone. Sometimes they leave the apartment several times during a year. One year, they don't leave at all.

Most of their view of the world comes from the five thousand movies on videocassette and DVD their father accumulates. The boys type scripts for their favorites. Then they re-enact the movies and film them. They seem particularly fond of Quentin Tarantino, Christopher Nolan, and Martin Scorsese movies. They make their own costumes and prop guns.

Visnu is not a participant. She seems ill or disabled in some way.

It all changes one day during 2010, when Mukunda disobeys his father and leaves the apartment. He walks around the neighborhood. Soon, all the boys begin to experience the world.

Then a recent film school graduate named Crystal Moselle spots the boys, aged eleven to eighteen, as they walk together in New York. They wear matching black suits, black Ray Bans, and have waist-length black hair. 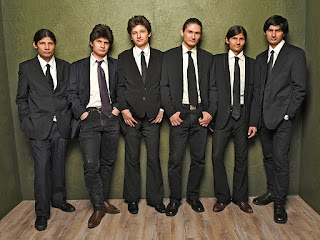 She becomes the first person they invite to their apartment, and she makes The Wolfpack.

To watch it, in parts, is to see what grown-up babies feel the first time they touch sand and go in salt water and feel the sun on their skin.

The boys, now young men, seem unusually pleasant, attractive, and intelligent. You need to see the documentary to learn more.

I watched The Wolfpack on Netflix Streaming. I will do something I don't think I've ever done before. I grant this film The Janie Junebug MUST SEE Seal of Approval.

Don't expect to be told what to think about this family. Moselle maintains her position as a documentary filmmaker--not a commentator. You must form your own opinions. I've done some research on the family today. If you want to Google them, then I suggest you watch the movie first.