During the late '90s, actor/producer Bob Balaban proposed to auteur Robert Altman that they make a whodunit about a murder during a 1930s weekend party at an English country house. The twist was that the audience would know who was guilty, and the events that unfolded would be seen through the eyes of the servants.

Bob Balaban had done some work with a chubby, balding, not-very-successful actor named Julian Fellowes, who had an encyclopedic knowledge of English country houses. Balaban recommended to Altman that Julian Fellowes write the screenplay for their movie. Fellowes soon had seventy-five pages of the script, which Altman and Balaban loved. Thus began the career of a great writer, and the creation of a great movie. 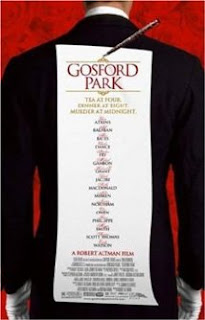 One needn't be a fan of Downton Abbey to enjoy Gosford Park, but when I watched Gosford Park recently--many years after my first viewing--I noticed a number of Fellowes' trademarks that made their way to Downton, such as an intricate plot; difficult relationships between many of the characters; and outstanding dialog that is sometimes sarcastic, sometimes earnest, and always a revelation.

Julian Fellowes ended up the only nominee to take home sweet, golden Oscar. However, the movie and its cast received many other nominations and awards, including The Screen Actors Guild award for the Outstanding Cast in a motion picture.

I insisted that Willy Dunne Wooters watch Gosford Park with me so he could see the precursor to his beloved Downton Abbey (I'm re-watching it with him; we're in the middle of season four [don't tell him I watch the current season without him]). I noticed quite a bit of sighing and fidgeting as we viewed Gosford. I think it was a little slow moving for him, but he asked me some questions afterwards.

We watched Gosford Park on a DVD that Netflix delivered to my mailbox; however, the movie is now available on Amazon Prime, free for Prime members on their streaming service. If you get the DVD, I suggest you watch some of the bonus features about making the movie. They are quite interesting.