The English language is so confusing! Two many words that sounds to much alike, and spellcheck doesn't tell us how too handle them. It doesn't know the correct spelling of words we want that sound alike.

Here's an example of a word that might be especially confusing because we don't use it often: pique.

When something grabs our attention or irritates us, it doesn't peak or peek us. The correct word is

My request is that when we discuss Downton Abbey that you avoid spoilers in your comments.

Some of my readers, such as Rita and Karma at SoulComfort's Corner, can't watch the show until it's available online. Others record it and watch it later in the week. Although I was excited about the new season of Downton, which began Sunday evening, I didn't have time to watch it when it aired. I'll watch it on my close personal friend DVR when I have time.

Some of our friends have never seen Downton, so I try not to say too much about the earlier seasons, but I don't worry about those as much as the current season.

I have Willy Dunne Wooters watching Downton on Amazon Prime now. We're on season four. I'm happy to watch it again. This time I'm more aware of the humor.

And I must tell you that Sir Wooters has quite a crush on Lady Sybil: 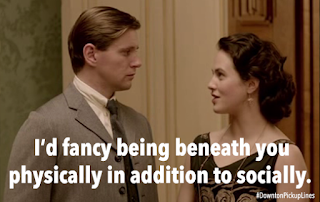