Michael's question for January, 2016 (Look! I remembered it's a new year!) is the following:

What are some new year’s resolutions you’ve had in the past?

Michael also states: If you don’t believe in new year’s resolutions, you can either explain why you don’t or you can talk about a big resolution you made that wasn’t necessarily on new year’s day (for example, in March this year I decided to start uploading a photo of myself to Facebook every day. I’ve been going for 284 days now and the majority of my friends love it).

I don't think my answer to the question seems important. I must dash off to friend Michael on Facebook so I can see a picture of his darling face every day. And so I can remind him frequently that he is exactly one foot shorter than my son.

Now, let's get around to the question: I don't believe in new year's resolutions. They seem bound to die. Instead, I set goals for myself when I need to do so. Sometimes I achieve my goals. Sometimes I realize they aren't worthwhile. But I seldom give up because the goal is too difficult to achieve.

The most important goal I achieved was finishing college. It took me twenty years to get that BA in English, but I've been the proud owner of a college diploma since 1998. Now, hang on a minute, and I'll tell you how many colleges I attended. Take two to the power of ten and subtract twelve and . . . I have to think. Do not make a sound. I guess you can tell I didn't major in math.

I think the answer is six universities, but I might have missed a couple of places. We spent a lot of years moving from one place to another for my ex-husband's education and career. I'd take a few classes. Then we'd move, and I'd take a few more classes.

If I hadn't been a grader for a professor and a tutor in the university writing center, I don't think I could have started Janie Junebug Righting & Editing.

Thanks for a great question, Michael. I hope you visit Michael at A Life Examined so you can see the complete list of participants in the question of the month. They'll all appreciate a visit from you.

I'm writing this post on Sunday night, which means that in a few minutes the first episode of the final season of Downton Abbey begins. I'm swooning. Quick! Bring my fainting couch. Rue La La currently has fashions inspired by Downton Abbey. It's a good thing I can't walk in heels because I'm not one bit tempted to buy a pair of shoes that costs $959.99. Not that I'd be tempted if I could walk in heels. I swear I would not be tempted!

Ah, the Dowager Countess has one more season to give everyone hell: 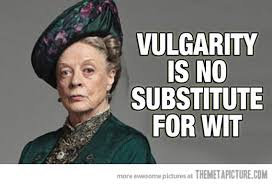 This photo is nice, but who is that girl? The one with the long hair who is seated in the middle at the front--though not the front where Matthew nearly lost the use of his penis. Who the hell does she think she is? 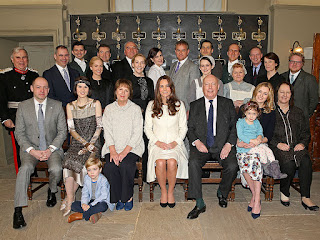 One more shot for my beloved pals Rita Pita Pan and Karma at SoulComfort's Corner. Rita, I know you're watching. 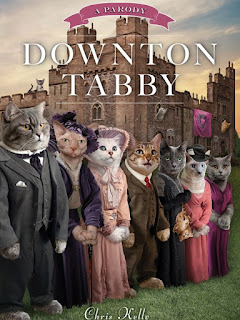 I know I said that was the last, but I cahn't (I write with an English accent) resist one more, bitch: 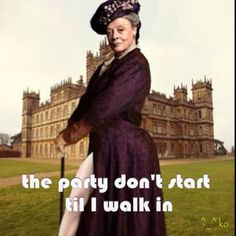