Once upon a time, a young secretary in Liverpool used her lunch break to hear a band play. It was love at first sight, as it was for so many girls. Soon The Beatles made it big, and the secretary worked for them. Her name was Freda Kelly, but to the four lads she was Good Ol' Freda (2013, PG, Available on DVD and Netflix Streaming). 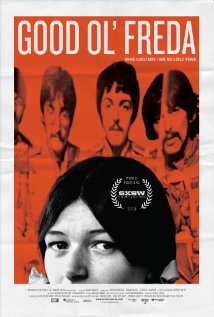 After I watched Good Ol' Freda on Netflix Streaming, I discovered it on some lists of "Must Watch" documentaries. I agree with the folks who created the lists. Freda's story is thoroughly enjoyable, and she tells much of it herself, though she hasn't made a career out of being the Beatles' former secretary.

Freda tells great stories about her days answering fan mail and writing a monthly newsletter for Beatles' fan club members. Every time the boys had their hair cut, the barber carefully swept up the trimmings and gave them to Freda. When a fan sent a letter that said, Oh, may I please have a lock of George's hair?, Freda saw to it that it was George's hair mailed to the fan.

Freda struggled to get backstage at one concert and couldn't make her way to The Beatles' dressing room, so she hung out with The Moody Blues. When she finally got to The Beatles, John told her that if she preferred to hang out with the Moodies (John was moody himself), then she could consider herself fired. Fine, said Freda. She asked the other fellows if they wanted to fire her. Each said, No, no. Then I work for everyone except you, she told John. John immediately begged to re-hire her.

For someone who avoided the limelight so long and is described as shy, Freda was one tough bird. Anyone who dropped by her office for a cup of tea, including a lead singer from another band, ended up running an errand for Freda.

Asked if she dated any Beatles, she immediately says, No, and then changes her response to, I won't kiss and tell.

Freda Kelly could have made a fortune with The Beatles' memorabilia she had when the band split. Instead, other than a box of items in her attic, she gave everything to the fans--because it was for the fans all along.

Good Ol' Freda earns The Janie Junebug Seal of Highest Approval. I don't know if your kids will be interested in this documentary, but if they don't know who The Beatles are, then you'd better introduce them.

The man she calls Richie appears at the conclusion of the film. Do you know who Richie is?

P.S. You have until midnight EST today (Thursday, August 6th) to vote in my Battle of the Bands HERE. For Killing Me Softly, you can choose Roberta Flack or the Fugees. I'll announce the winner tomorrow. Be there, or be square.