On July 13th, 1985, rock stars volunteered to perform in two venues with the concerts broadcast internationally: Wembley Stadium in London and John F. Kennedy Stadium in Philadelphia. I remember watching bits of the concert, especially during the evening, but because I missed many of the acts, I asked my friends at Netflix to send me the DVDs of the concert.

Other countries, such as Australia and Germany, also held concerts. The event drew one of the largest audiences ever. Wikipedia states: "An estimated global audience of 1.9 billion, across 150 nations, watched the live broadcast."

Bob Geldof of Boomtown Rats and Midge Ure of Ultravox responded to a BBC report about people starving in Ethopia to create a fundraising single called "Do They Know It's Christmas?" Rock stars in the U.S. responded with their own charitable effort: "We Are the World."

Boy George of Culture Club came up with the idea to hold a concert. Geldof took up the cause and ran with it.

As I enjoy the DVDs of the concert, I'm struck by two eighties fashion dos that are probably now don'ts:

And now let's look at my favorite baggy suit of the day. Kenny Loggins sang Footlose while wearing what appeared to be a gray and black print on white. It looks a lot like flannel jammies. 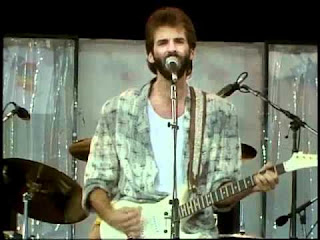 Do you have any special memories of Live Aid?