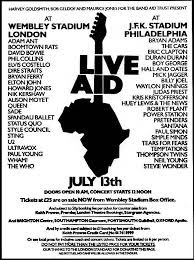 How do we preserve the memory of Live Aid if we weren't fortunate enough to be at one of the venues?

We have the memories of the performers and the people who watched at home.

I hope any bad feelings left over from the concerts to benefit the starving people of Ethiopia have dissipated over the years. But what about preserving the performances from this historic occasion?

Yes, I've watched the four DVDs of the show, but they don't include all the performances. Some bands aren't included because of music rights issues or because they were unhappy with their performances and wouldn't allow them to be shown again.

The only people who have the complete concerts are those with aging videocassettes they recorded at home on that day because Bob Geldof considered the show a one-time only event. He asked all the broadcasters to eraser their tapes.

ABC dutifully obeyed Geldof, but in 2004 when Geldof finally realized the concert should be released, he learned that the BBC and MTV disobeyed him. They had the parts of the concert they broadcast, although the BBC recordings are said to be superior.

In spite of backstage drama, I hope the major lesson of July 13th, 1985, is that people can come together to raise money for a cause. We've seen many such examples since then, such as The Concert for New York after 9/11.

I've watched quite a few memorable performances on the DVDs, but I must say that the best is that of Queen. Many think that Queen gave the all-time greatest live performance ever. I swear Freddie Mercury must have been jolted with power that he sent into the ether to electrify the crowd and even the viewers at home.


We still miss you, Freddie. 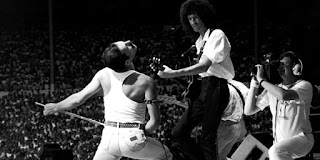 P.S. I'm sorry I confused some of you. I did not attend either concert. I watched part of the show on TV. My strongest memory is of Paul McCartney starting to sing Let It Be, but his microphone didn't work for the first two minutes of the song.

And no, Shady, I am not the topless girl!
Posted by Janie Junebug at Wednesday, August 26, 2015