This week's show isn't a movie. It's a BBC series that has six episodes and is also called a Netflix Original Series. It's Happy Valley (2014, Available on DVD and Netflix Streaming). 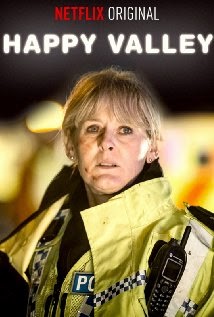 I noticed this advertisement on Netflix Streaming and thought it looked interesting because the actress is on Last Tango In Halifax, another BBC six-episode per season series that I've seen on PBS. Two seasons of Last Tango are available, and a third is in the works. Willy Dunne Wooters and I are smitten with Last Tango. WDW says it is about us (the love story with the older couple).

Then Rita of SoulComfort's Corner mentioned Happy Valley to me. Rita and I tend to like the same movies and TV shows. I rely on her opinion. She said she had watched Happy Valley on Netflix Streaming and gotten so caught up in it that she stayed up till two a.m. to finish the series.

I told Willy Dunne Wooters about it. He agreed we should give it a try. The weekend before last we watched the first two episodes. After the second one, WDW said, If I didn't have to go to work in the morning I'd stay up till two to watch the rest of this show.

This past weekend we viewed the rest of the series--four episodes. Heavens to Betsy! We couldn't believe how compelling and frightening and poignant this show is. We felt as if we were watching real life.

The actress from Last Tango is named Sarah Lancashire, and she's now the top of the pops with me. She's good in Tango, but in Happy Valley she's nothing short of amazing. She plays a police sergeant named Catherine Cawood who lives with her eight-year-old grandson, whose mother (Sarah's daughter) committed suicide; and her sister, a former heroin addict. Catherine's husband left her because he couldn't bear to be around Ryan, the grandson, who exists because their daughter was raped by a man named Tommy Lee Royce (James Norton, who is just about as creepy as it gets).

One day Cawood thinks she sees Royce, and she's right. He's been released from prison. Nothing good will come of that. Royce's presence, Ryan and Catherine's problems at home, Catherine's problems at work, and the kidnapping of a local girl had us spellbound. I cried a few tears three or four times because the show is so intense. It also features some comic relief sarcastic asides. I don't think WDW cried, but he loves the show, too.

Happy Valley is brilliantly written, and I'll go so far as to call it a show about female empowerment. The women demonstrate great emotional strength most of the time; they have the occasional breakdown or fit of temper--only human, they aren't hysterical females. Moreover, Catherine Cawood is quite the kick ass cop. She holds her own against some very tough men and shows no fear. She's a great role model. She does whatever it takes to perform her duties.

This show is not for children, and I'd think twice about allowing teens to watch it. In fact, if you're of the sensitive variety and prone to nightmares, it might not be for you.

Here's a piece of trivia about the series that's not so trivial: The show is set in Yorkshire, as is Last Tango. Catherine says she's going to Heptonstall to visit her daughter's grave. I thought, That sounds familiar. I believe that's where Sylvia Plath is buried (Plath is one of my two favorite poets; the other is Emily Dickinson).

Catherine kneels at her daughter's grave. Nearby, I see a grave that looks familiar. It has a great number of tulips on it. Could that be Sylvia Plath's grave? I wondered. Her devotees often leave tulips on her grave. I've never been there, but I've seen photos of it. It's a rather distinct grave. I checked in with my friend Google and learned that yes, the scenes with the daughter's grave were filmed very close to Plath's grave. Ryan mentions pens on the grave, too. I learned online that Plath's fans also leave pens on her grave.

At first, I thought, What an interesting coincidence! They were near Sylvia Plath's grave, and I recognized it.

I can't imagine these connections are mere coincidence. I believe that shooting near Plath's grave was a deliberate decision. Plath has become a feminist icon as a great poet and as a woman who tried to have it all (poet, writer, wife, mother, homemaker, promoter of her husband's career--Ted Hughes eventually became the poet laureate of England), only to have her husband destroy their family. Plath had long been subject to deep depressions, yet her husband left her to fend for herself and their two young children. I'm not saying he didn't provide her with money for their care. He withdrew his emotional support and abandoned her.

Shooting scenes where Plath's grave can be seen seems to me to be an announcement that this series is a feminist show. It's about women who are remarkably brave. It's also about women who can be brought low because they are female, who are trampled on by men. The feminist struggle continues. 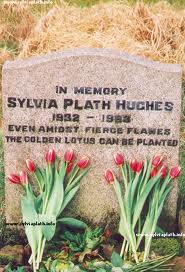 Happy Valley, created and written by Sally Wainwright--also the creator and writer of Last Tango In Halifax--earns The Janie Junebug & Willy Dunne Wooters Seal of Highest, Exceptional Love and Approval. It's as good as watching an excellent feature film. Better than most.

A second season of Happy Valley is scheduled to appear in 2015.