MOVIE WEEKEND: THE FAULT IN OUR STARS

sniff
sniffle
wipe away a tear
let loose with a sob 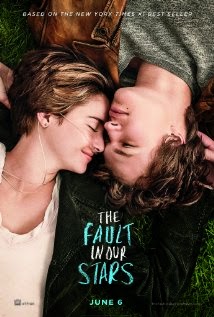 This movie got a lot of attention. It's based on a young adult novel, which I haven't read, and it's a tearjerker. I was afraid it would be sappy. It isn't. I didn't cry while I watched it, but I felt moved. It's tender and poignant and happy in a way that most stories can't possibly be happy.

Hazel (Shailene Woodley) and Gus (Ansel Elgort) meet in a cancer support group for teens. They know they're going to die.

Gus calls his new friend Hazel Grace. She insists they are just friends. Her cancer has expanded from her thyroid into her lungs, so she carries an oxygen tank everywhere she goes.

Hazel and Gus agree to read each other's favorite novels. Hazel gives Gus An Imperial Affliction by Peter Van Houten (Willem Dafoe). The books means a great deal to Hazel. Its plot is similar to her experiences. She longs to ask the author some questions about his book. Gus arranges a visit for them with Van Houten, who has become a recluse in Amsterdam. While they are in Amsterdam, they visit the Anne Frank house. Anne Frank, of course, was doomed, just as Hazel and Gus are.

Gus and Hazel have a bond that continues to develop. Gus knows he's in love with Hazel Grace, and eventually, she realizes she loves him, too.

Hazel Grace Lancaster: I fell in love with him the way you fall asleep: Slowly, and then all at once.

Woodley and Elgort play their parts naturally and with seemingly little effort. The screenplay is excellent. Laura Dern deserves a shout out for playing Hazel's mom.

Augustus Waters: Hello, are you Monica's mother?
Monica's Mom: I am...
Augustus Waters: Hello, ma'am. Your daughter, she's done a great injustice, so we've come here seeking revenge. You see, we may not look like much, but between the three of us we have five legs, four eyes and two and a half pairs of working lungs, but we also have two dozen eggs, so if I were you, I would go back inside.
[Monica's mother looks freaked and goes back inside]
Isaac: Did... That actually worked?
Augustus Waters: Yep.
Isaac: That was the stupidest speech I've ever... That actually worked?

I feel as if I took part in their experiences, which makes the story a great example of writing that can convey feelings most of us never have.

A few bits of trivia:


I wouldn't show this movie to children. Teens? They might wallow in grief, or laugh at the absurdity of a couple getting together when they know they will die. That's my way of saying that I have no idea how teens will react to the movie, but a lot of them have read the book on which it's based.

This movie is difficult to describe. I don't think I've ever seen anything like it. It's unique, and that's a word I don't use lightly.

The Fault In Our Stars earns The Janie Junebug Seal of Highest Approval.

Hazel Grace Lancaster: But, Gus, my love, I cannot tell you how thankful I am for our little infinity. I wouldn't trade it for the world. You gave me a forever within the numbered days, and I'm grateful.