This week I'm joining a blogfest hosted by The Armchair Squid. Here's what the Squid asked of participants:

The greatest films stand the test of time, speaking to us in different ways at various life stages.  Is there a movie that was a part of your life when you were younger that you see differently now?  Like fine wine, has it improved with age or did it die in the bottle?  Has maturity brought you new insights you missed in your youth?  We want to know all about it!

Join us for "Then and Now," a bloghop hosted by The Armchair Squid, Suze, Nicki Elson and Nancy Mock.  Tell us about a movie you loved when you were younger and have come to see differently over time - for better or for worse.

Thanks for asking, Squid. I first saw Gone With The Wind when I was in the sixth grade, which was during the Not-Yet-Technofried Age, which means my friend and I had to go to a movie theater in downtown Topeka, Kansas, to see this movie. We didn't have VCRs (gasp!). We didn't have cable TV (imagine sticking your car key in a light socket––yes, it's that shocking!). Gone With The Wind had never even been on TV, but if it had been, I would have seen it on a black-and-white TV with a snowy picture because we were the last people on Earth to get a color TV with a decent picture; that is, I would have seen it if it were on one of the two channels we could pick up. Windy wasn't on TV until I was in high school, and if I recall correctly, it was shown in two parts on two consecutive nights.

To see Gone With The Wind way back when, one had to wait for it to be shown in a theater, which happened every five years or so. Maybe. I don't know of a definite schedule for when it would appear. I remember my mother and older sisters going to see it in Kansas City several years before I saw it. I was not allowed to go, probably because I was too annoying. But then sixth grade came along and so did Wind, and my mother dumped my best friend and me at the theater to get rid of us for a few hours. It's a long movie.

We watched awestruck as the movie began and Scarlett prepared to attend the barbecue at the Wilkes' plantation. 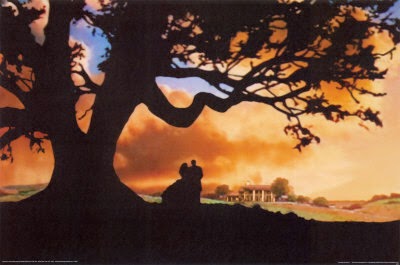 We sat through the opening, the first part of the movie, the intermission, the rest of the movie, and the closing credits and music. It was amazing! We had never seen such a movie––so beautiful and yet so grotesque with the horribly wounded Confederate soldiers and Melanie giving birth with no one but Scarlett to help her because Prissy the slave was too stupid.

Did we understand that when Frank Kennedy sought help to control the miscreants in Shantytown that he turned to the Ku Klux Klan?

Did we understand that when Rhett Butler carried Scarlett up the stairs to their bedroom that he raped her?

Did we understand, despite her beauty and suffering, that Scarlett O'Hara was ruthless and vicious? 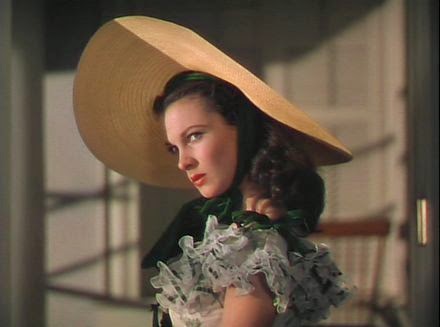 We didn't even understand that the slaves weren't happy. We knew that slavery had been a bad thing, but the slaves in Wind loved the O'Hara family so much that some of them stayed on after they were freed. These slaves were happy slaves.

We were so innocent and stupid.

When I watch Wind now, I'm still enthralled by the beauty of the production, but I see it with a more discerning eye.

One sequence in particular stands out to me. Mammy tells Scarlett that she needs to eat before she goes to the barbecue:

Mammy: Oh now, Miss Scarlett, you come on and eat jess a little, honey!
Scarlett: No! I'm going to have a good time today, and do my eating at the barbeque.
Mammy: If you don't care what folks says about dis family I does! I is told ya and told ya that you can always tell a lady by the way she eat in front of folks like a bird. And I ain't aimin' for you to go to Mr. John Wilkenson's and eat like a field hand and gobble like a hog!
Scarlett: Fiddle-dee-dee! Ashley told me he likes to see a girl with a healthy appetite!
Mammy: What gentlemen says and what they thinks is two different things, and I ain't noticed Mr. Ashley askin' for to marry you.
Scarlett: [Turns around slowly to face Mammy then throws her umbrella and stuffs food into her mouth]
Mammy: Now don't eat too fast. Ain't no need for it come right back up again!
Scarlett: [With her mouth full] Why does a girl have to be so silly to catch a husband?

I absolutely did not understand the undercurrents of this sequence the first time I saw it, nor the second, perhaps not even the third. I had to be more mature and an aficionado of films before I saw what Hattie McDaniel (Mammy) really does. Yes, Mammy manipulates Scarlett into eating breakfast by bringing up that Ashley Wilkes has not asked Scarlett to marry him. What I didn't comprehend until more recent years is that Hattie McDaniel reveals what Mammy really thinks of Scarlett. It's in the subtlety of McDaniel's performance. She gives the correct impression for a slave: loving, fussing over young Scarlett. But right before McDaniel says the line about Ashley Wilkes, a shadow passes over her face. It's a brief look of malevolence that speaks volumes. This photo does not capture it, but it's close to the moment:

"The look" reveals that Mammy hates Scarlett. Out and out hates her. She may have brought up this child, she may be dressing her perfectly for the barbecue, but Mammy sees Scarlett for the selfish, foolish creature she really is.

She didn't win because she didn't deserve it, and Hattie McDaniel did. She became the first African-American to be nominated for an Academy Award, and the first to win.

Even though she couldn't attend the premiere of the film in Atlanta because colored people weren't allowed at such an important occasion.

So it's my opinion of Gone With The Wind that has changed the most over the years. It's a great movie––an epic film––but maturity has brought me greater insight into this movie, and in particular, to Hattie McDaniel's performance. I see Gone With The Wind for better now, because I'm able to see it for worse.

Thank you, Squid Ladies, for setting up this blogfest. 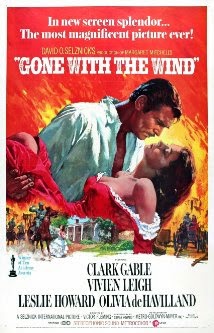