I want to spend my time catching up with your blogs after the Great Blog Roll Debacle, so this MOVIE WEEKEND is a quickie about two films I didn't like all that much. They aren't bad enough for me to warn you away from them. You might like them, or you might read my review and decide not to waste your time on them. 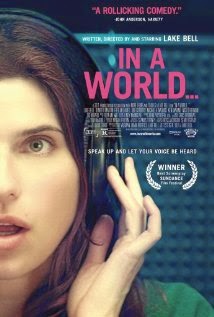 Written, directed, and starring Lake Bell as Carol Solomon, In A World appeared to be a comedy, based on the trailer. Maybe it is a comedy and I just don't get it.

Carol Solomon wants to do voice-overs for movie trailers. She can imitate all sorts of accents and do the kind of smooth voice needed for a movie trailer beginning with a dramatic rendering of "in a world." Her father is one of the most successful voice-over guys around, and even he tells Carol that voice-overs are done by men. It isn't a job for women. Carol sets out to prove him wrong.

The movie has a couple of poignant moments, but that's about it. I didn't laugh. I don't think I smiled. The one point about this movie that stands out to me is that Carol tries to teach some women not to speak in babyish voices and not to end a declaratory statement as if it's a question. A lot of women do that. I think it's a habit borne of insecurity. I used to do it, but Hi! My name is Janie and I've been in voice recovery for a long time.

In A World earns The Janie Junebug Seal of Don't Bother.

The second movie, Enough Said, is a little better (2013, Rated PG-13, Available on DVD). I wanted to see this one because James Gandolfini is in it and I'm still kinda sad that he died. He was Tony Soprano. 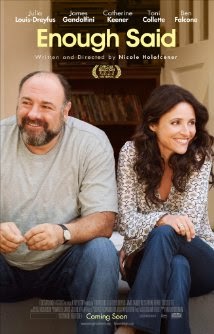 In Enough Said, James Gandolfini plays Albert, who meets Eva (Julia Louis-Dreyfus) at a party. Albert asks Eva out on a date, and they hit it off. Eva, who is a masseuse, also meets a new client, Marianne (Catherine Keener), at the party. Eva massages Marianne, and they become friends. Marianne is a successful poet. Eva thinks Marianne is really smart. Marianne complains a lot about her ex-husband, who turns out to be Albert.

Eva allows Marianne's comments to poison her relationship with Albert, who has no idea that his new girlfriend hangs out with his ex-wife. Soon, Eva picks on Albert for the very habits Marianne complains about, instead of appreciating her initial happiness with him.

I enjoy Albert and Eva as a couple. They have a dry, deadpan witty repartee:

I can't tell you what happens because I'd ruin the movie for you. You might want to look at James Gandolfini and feel sad, too. I've liked Julia Louis-Dreyfus for many years, but as Eva, she's kind of weird and prone to doing stupid stuff. The character is not very likable. Eva also describes herself as middle-aged and flabby. If Julia Louis-Dreyfus is supposed to be middle-aged and flabby, that what the hell am I?

You can find better movies to watch than these two.

Eva: I'm tired of being funny.
Albert: Me too.
Janie Junebug: Same here.
Posted by Janie Junebug at Thursday, June 26, 2014